ATHENS, GA – Ibhar Al Mheid aka Mohammad Almheid uses SeekingArrangements.com (sometimes Seeking.com) to find his victims because many young girls that are advertised on these websites do not screen.  Almheid has had three arrests in just a five month span.  When will Homeland Security, or the FBI/government look into this predator and continue to allow him to stay in the United States?

The proof is all over the internet with Ibhar Al Mheid’s public arrest records listed, issued by Athens-Clarke county, Georgia and a TPO against him (that is a felony in itself, yet he refuses to stop his abuse and stalking – criminal behaviors against women). He has at least 6 or 7 charges pending and this is before his latest arrest for “AGGRAVATED STALKING” and “ELECTRONIC TRANSMISSION/POST OF VIDEO/PHOTO DEPICTING NUDITY/SEXUALLY EXPLICIT CONDUCT W/O CONSENT”.

Ibhar Al Mheid is currently incarcerated in Athens-Clarke county, Georgia because he refuses to abide by his TPO and leave a young college girl he met on SeekingArrangements alone. As mentioned in other reports, he films women without their knowledge and uploads it all online without their consent (another misdemeanor/felony).

Ibhar Al Mheid was arrested for family violence (fv) aggravated stalking, damage to property, and criminal trespass, in December 2020. Mheid was then arrested again in March of 2021 for similar charges (and $25,000 bond). Now Ibhar Al Mheid is currently incarcerated, yet AGAIN, after being arrested a third time in the past 5 months, in Athens Clarke county a Georgia jail on charges of aggravated stalking (another felony and he already has a TPO on him) and uploading nude/explicit sexual content (misdemeanor and not his first time doing this).

COBRA Says:  This dangerous predator keeps getting arrested and jailed because he won’t stop stalking and threatening women. Why is he even allowed to stay in the USA? 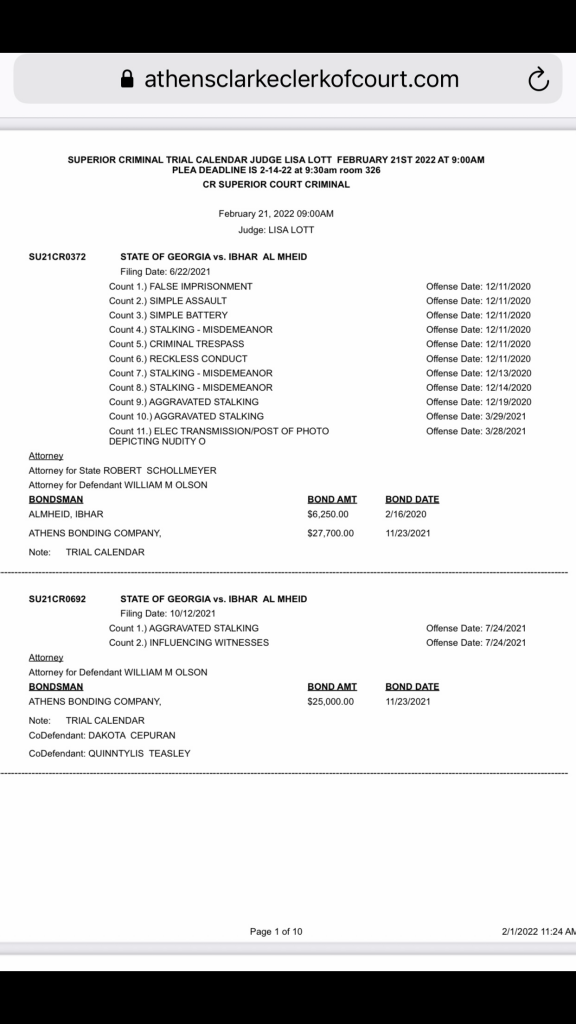 The young girl Ibhar Al Mheid won’t stop stalking and abusing is only a 21 year old college student who cannot even continue her studies because he will not stop until he hurts her again. He also has a ‘wife’ (he used for green card) and two children, who are at home while Ibhar Al Mheid spends all his free time stalking (violating his TPO), committing acts of assault and threatening a college kid. Ibhar Al Mheid is very dangerous to women and citizens in the USA. 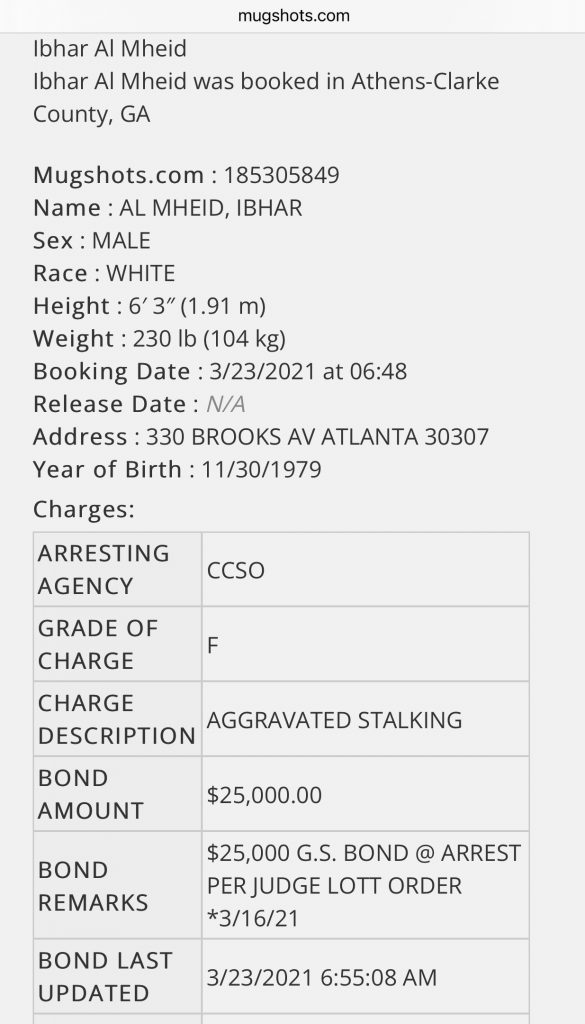 SCUMBAGGED Tip:  If only prostitution was legalized there would actually be some form of initial protection and deterrent from men who do these types of things towards women who work in the service industry.  Someone should be held accountable for intentionally creating an environment that is rife with rapes, diseases and human trafficking and it starts with the State Governments who have not passed legislation to allow women who work in the sex industry to have protection via a protected and monitored employment opportunity.  In any case, SeekingArrangements.com and other websites need to monitor individuals like this and hopefully they have behind the scenes software established that can help detect new accounts as well as keywords.