Rebecca Husselbee is an assistant foreign editor for The Sun News in Birmingham, West Midlands, United Kingdom.  She also has publications at one time or another featured with the following agencies:  Daily Mirror, Daily Mail, The Sun, Daily Express, News.com.au, The Daily Telegraph (Australia), The Herald Sun, Scottish Daily Record, The Scottish Sun, The Irish Sun, The Advertiser (South Australia), The Courier-Mail, Gold Coast Bulletin, Mercury & The U.S. Sun.  Her position at these news organization(s) or holding any journalistic position with any editorial should be highly questioned and scrutinized considering her outlook and personal viewpoints towards muslims.

Husselbee has shared on at least one occasion racial opinions and derogatory remarks towards muslim women both in private and in public.  In one such instance (shown below) on her personal twitter account, she shared an image that compared a muslim woman to a camel in so many words stating “When your dad cheats on your mother with a camel.”

The cowardly racist Rebecca Husselbee attempted to delete her racists sexually abusive Tweets about Muslims but they have been preserved online as shown in the screenshot below.

“When your dad cheats on your mother with a camel.” 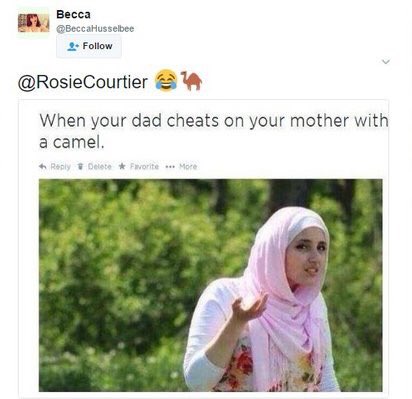 SCUMBAGGED Tip:  Everyone has different opinions on everything.  There should be zero tolerance for anyone embedded within a news organization.  We need to have a fair reporting system, not one that is guided based on beliefs and personal viewpoints.  Unfortunately the world is filled with Rebecca’s.