Cassandra Biddulph of Lakewood, Ohio, has an extensive criminal history.  One that has been riddled with repeat violence, child endangerment, drug possession & drug trafficking charges.  Most recently, she made local news for stabbing her own dog, a puppy pit bull, to death.

On the night of February 11, 2017, Cassandra and her boyfriend Charles Hobbs got into a domestic dispute.  The two had been using hardcore narcotics within their place of residence in Lakewood, Ohio, when things took a turn for the worse.  Charles became irate with Cassandra for smoking the last of his crack cocaine when one thing lead to another.  What started off as only a verbal argument, quickly turned into a nightmare, a nightmare that would see the couples living room couch bathed in blood by the end of the night.

In the midst of their dispute Cassandra Biddulph became enraged.  She went into the couples kitchen and grabbed a steak knife, threatening to stab Mr. Hobbs and their 11 month baby pit bull if he didn’t calm down.  The violence went on, from room to room.

Following through with her threat, Cassandra Biddulph grabbed the puppy and sat down on the couch, forcefully holding the pit bull down and began stabbing the beloved family pet in the neck over and over again, 13 times to be precise. 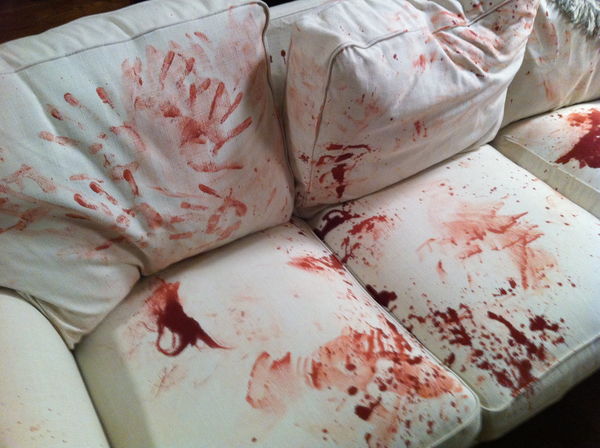 Afterwards, instead of getting the puppy any medical attention, Hobbs and Biddulph simply put the dog on the back porch, in the rain, where it bled to death.  These events, the drug use, the domestic violence and the stabbing of the puppy all took place in front of Mrs. Biddulph’s young daughter.  Disgusting…

Mrs. Biddulph was then arrested and sent to Cuyahoga County Jail, where she faced charges of receiving stolen property, having weapons while under disability, endangering children, and cruelty to animals.  Approximately a month later she posted her bond and was released.

On August 14, 2017, Cassanda Biddulph was sentenced in front of Judge Janet R. Burnside to a term of 2 years probation.  One thing that stood out from her sentencing was that she wasn’t given any jail time due to her extensive record and multiple prison terms.  In fact, she wasn’t even issued a court order prohibiting her to own another animal, most specifically, a dog.

In 2009 she was sentenced to 1 year in prison from an indictment that stemmed from Drug Trafficking, Endangering Children (her daughter, again) & Drug Possession (Case #CR-09-526550-E).

In 2016 she had a case that was ultimately dismissed regarding a manner of ‘attempt’, which stemmed from allegedly prostituting herself on Backpage to pay for her drug habit.

HAWK Says:  How this woman still maintains custody of her daughter is a wonder.  She’s been busy using drugs, going to prison and drug trafficking for the past decade.  To top it off, she then killed her beloved daughters pet pit bull, all of this abuse being done in front of her.  What a sick, pathetic scumbag!

Biddulph’s boyfriend, who also has an extensive criminal history, Charles Hobbs, was sentenced earlier this month to nine months in prison for his role.

Investigators also found a gun in the couples attic.

SCUMBAGGED Tip:  Someone needs to get this daughter out of the custody of this mad woman.  This lady has no business being around her daughter or other animals.  Furthermore, drugs, especially crack cocaine is a horrible addiction.  Individuals who are found to be abusing this drug are urged to contact a resource center near them and seek treatment immediately.