Readers Note:  Brittany Morrison has been added to the Top 50 Rat Scumbags of Lorain County.  The page has also been updated with 5 new entries, her current rank is #10.

A 20 year old girl from Lorain County is on a hell bent mission for more.  More drugs, more sex & more money.   Brittany Morrison, out of Elyria, has racked up numerous charges, some of which are felonies and has resorted to any means necessary to avoid any lengthy jail time.  She has built a horrendous reputation for turning on those closest to her, using those that would help her the most and essentially burning every bridge along the way.  She is without a doubt a menace to society.

In 2016 Brittany snitched on the well known Milton family whom are located in Elyria.  She did this in a self serving moment to get out of doing jail time (which worked as planned). She was facing 2-3 years in prison for that case and she didn’t stop there.  Since then, she has rolled over on numerous close friends and associates to get herself out of trouble – all for the purpose of maintaining her high.  Her drug of choice?  None other than the vicious drug heroin. 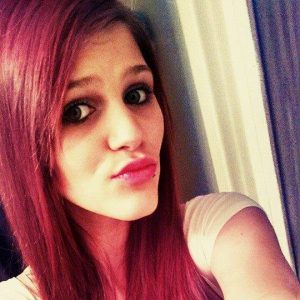 ERRATIC Says:  It’s time for some tough love and a good old fashioned wake-up call for this girl, #SCUMBAGGED!

Brittany’s habit peaks at around $200 per day and is primarily supported by her very own self promoted prostitution methods.  She places ads on the popular website www.backpage.com to accrue just enough money to keep herself from getting sick and when all else fails, robbing her friends and family. Recently, Brittany stooped to a whole new low when she attacked her own sister.  Hitting her in the head with a frying pan and stabbing her – which resulted in felonious assault and domestic violence charges. The reason for stabbing her own sister? Certainly not self defense, but rather, because she wouldn’t give her money to buy drugs. One of Brittany’s largest clients is a lawyer (name removed) who works out of Elyria. Most commonly this lawyer can be found within the halls of the municipal courthouse (and on occasion the Justice Center) and is known around town as “crazy eyes”, simply because his eyes are allllllllll over the place.

Case #2017CRB02315 – Possessing drugs, drug abuse instruments & paraphernalia.  Case was merged with her felony probation, as a result of turning over state evidence she had her case dismissed in return.

Case #2017CRA02314 – Possession of drugs (again), also occurred on the same date as the two cases above and also resulted in a dismissal of all charges due to her over eagerness to cooperate with authorities.

Case #2016CRA02099 – Felonious assault.  This was the case where she stabbed her own sister with a knife and hit her with a frying pan.  Due to a compliance plea agreement this case too was also dismissed.

Case #2015CRB01859 – Theft from Walmart.  When she was down and out on her prostitution endeavors and none of her “regulars” were available, she decided to simply go and take what she needed.  Walking boldly into the super center and attempting to walk out.  The eye in the sky saw her coming a mile away and caught her red handed.

The Many Faces of Brittany

Not only is she a drug user, rat, sister beater, prostitute and felon.  At the end of it all she’s a mother of a child.  A child that is suffering the most, a silent voice in a life of turmoil and chaos.  One who has been forgotten, one who has been neglected, most certainly abused (physically or mentally) and deserted.  Heroin surely takes it’s toll on society and individuals such as Brittany Morrison, but, it all starts and ends with the individual.  The individuals choice to initially use the drug, the individuals choice to stop using the drug.  There are no excuses for this type of behavior that becomes prolonged over a 3 year period.  Especially not with treatments such as Vivitrol which work effectively in wide studies and especially not with all of the drug rehab treatment centers and opportunities afforded to Mrs. Morrison.  No, all it boils down to is a selfish, self-centered person who chooses themselves and how they feel over anyone or anything.

SCUMBAGGED Tip:  If she’s willing to physically harm her sister for a few dollars in drug money and willing to turn on those closest to her, then it’s safe to say that she’s capable of anything.  It’s good advice – and simply common sense – to stay away from this girl.  If you’re a friend of hers, I would question the relationship you have with your said friend, and if you’re her dope boy, I would quit selling dope effective immediately (not just because it’s dangerous to deal with her, but simply because it’s the right thing to do and it’s harming many communities).  As for Brittany, if you’re reading this, sincerely seek out help, you have a child, you need to get fixed and get better.  Let this serve as a wakeup call to your atrocities and hopefully lead you into creating a better forged reputation for yourself someday.  It’s possible.