The Convict Club consists of a secretive, elite, wealthy and highly intelligent group of criminal’s operating out of Strongsville, Ohio.  Gus Kafantaris, Vince Adams & Santino DiBerardino are all suspected of engaging in a conspiracy to steal and deprive ex-New Jersey Police Captain, Eugene Venable, on more than $300,000 worth of gym equipment, fixtures and members.  In addition, Kafantaris & DiBerardino have both been to prison, Kafantaris, Adams & DiBerardino all currently have ongoing legal matters in Cuyahoga Common Pleas Courts where they are being sued by individuals or businesses for alleged corporate theft, violating contracts or outright failures to pay what they owe.

The location of “The Convict Club” can be found in a well-known and highly respected suburb of Cleveland.  That city being Strongsville, Ohio.  The property is owned by Mr. Kafantaris, located at 14783 Pearl Rd., Strongsville OH 44136 and the name of the illegal business is Xtreme Fitness Strongsville.

The information provided below sheds light into the serious nature of the individuals who are operating in the Strongsville community and elsewhere.  All of which has gone on under the radar and unbeknownst to the community and even the police, until now.  All of this is only the tip of the proverbial criminal iceberg…

The individuals featured below each have civil blemishes.  Two of the three have criminal records.  All 3 have engaged in what appears to be a corporate level conspiracy (at the least) to defraud and defame another for $300,000+.  The following information breaks down their past and present court cases in full detail as well as their probable involvement in the ongoing scheme.

Readers Note:  All personal contact information is to be utilized in an informational setting.  Do not utilize the information found on this page in a harassing, threatening or illegal manner.

Mr. Kafantaris is the owner of K&F Properties which owns the gym’s physical building and land.  He is also the criminal mastermind who conspired in deceptive, prolonged and nefarious ways in an attempt to illegally obtain $200,000 worth of gym equipment and convert a $20,000/month member base into his own pocket for paying absolutely nothing.  Kafantaris began devising the plan to defraud Mr. Venable who owned the Evol Fitness / Elevated Fitness Center between May and August of 2018.  He intentionally didn’t fix leaks in the building that saw rain falling onto members and he conspired with other local individuals and fellow gym owners in attempts or methods that he could take to keep the equipment and member base.

It is documented that Mr. Kafantaris spoke to at least one other local area gym owner stating “I don’t know what to do or how to do it yet but there has to be a way.  I can’t put a lean on his property, the lease doesn’t stipulate I can keep the property, we have to find a way to get the equipment and take these members”.  In that 30+ minute conversation he can be overheard trying to come up with numerous avenues to defraud and steal said property.

Fun Fact:  Kafantaris also hosted meetings, reviewed proposals and entertained pitches and ideas from at least 5 known interested parties as to how he could monetize the situation regarding Mr. Venable’s equipment and members.

Another conversation of note occurred between Kafantaris and yet another local business owner.  In that call, Kafantaris was called on 3-way (without his knowledge) where he was clearly overheard saying the following “I allowed Santino to go in and take over the club”.  At this point in time in July there was no lease signed with Santino, Adams or anyone.  Through Santino, Kafantaris kicked out Matthew Brown, refused Venable and the new owner of the equipment/members to obtain their property and began stealing both members and personal training clients that belonged to other companies.

Case #CR-90-250614-ZA found guilty by a Jury for Abduction and Attempted Felonious Assault.

***Travels to Greece regularly where he has family.  Allegedly has additional crimes there.

Santino DiBerardino was a known mafia enforcer for the Philadelphia Genovese crime family.  A man who also served time in Federal Prison, a man who was fired from Bally Total Fitness for embezzling upwards of $200,000.   The same man who sold Elvated Fitness Center to Eugene Venable for more than $300,000 in 2015 based on cooked books.

Mr. DiBerardino also went bankrupt on his home, took out a loan through Huntington Bank for more than $40,000, repaid $0 of it, found his company (Elevated Fitness Center) into dangerous territory with Ohio taxes.

Santino is directly responsible for helping to steal clients from Fitness Professional LLC., out of the current address where Xtreme Fitness Strongsville is now operating.  He also worked hand in hand with Gus to devise the current plot and plan to steal equipment and members for $0 in order to re-open a business for his buddy ole pal Vincent J. Adams and to help his longtime friend and business partner Gus Kafantaris.

Vince Adams went and registered a company after allowing himself to be looped into the Convict Club by DiBerardino and Kafantaris.  He registered his Xtreme Fitness Strongsville LLC., recently in August of 2018.  Opened up the club located at 17483 Pearl Rd., Strongsville operating with $160,000+ worth of equipment that he paid $0.00 for.  Using a member base that at it’s peak brought in $30,000/month for $0.00.  Must be nice right?

Vincent is a follower, far from a leader, yet, he has stood behind corporate companies and EIN numbers all the while he’s taken money from those who have loaned to him, gotten involved with others who he could skim off the top of.   Vince also paraded around publicly proclaiming “I am going to be the owner of the gym and I have acquired the equipment and members”.  Lies, lies and more lies…

Case #CV-18-900675 being sued for $77,930 by Robert P. Quail regarding a contract that he had signed and then didn’t adhere to.   In that contract Vincent J. Adams was loaned more than $20,000 by Mr. Quail.  In return Mr. Quail was supposed to receive interest, dividends and re-payment for his loan in the IPO that Mr. Adams had bought into.  Instead, Vincent paid him $0.00 in 8 years.

The list is lengthy and goes on and on for Mr. Adams in the Cuyahoga County Common Pleas Civil division.  From banks, to lenders, to credit cards, to past business associates, year after year after year he has something new pending against him.  What a great guy… 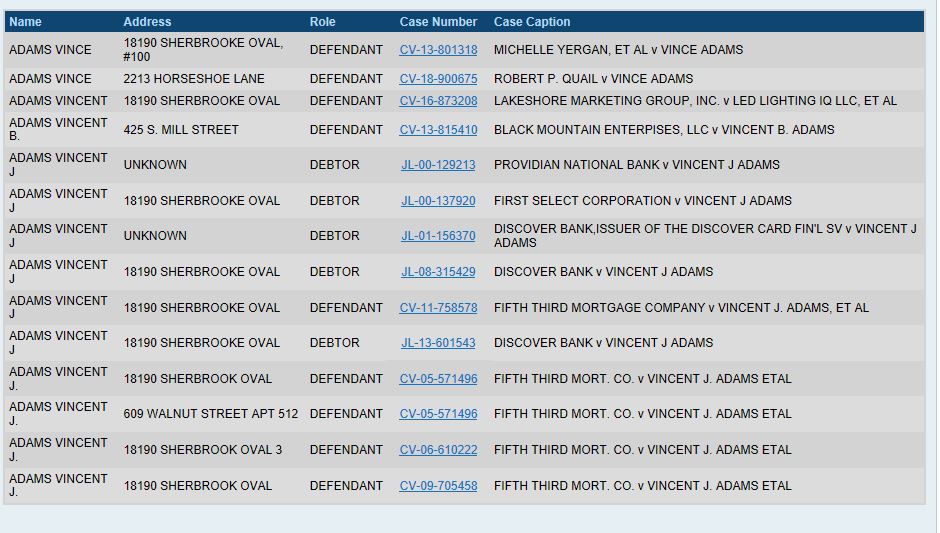 The Bottom Line:  The Convict Club is the perfect name for these three goons.  If you took the time to read through the entirety of their past and pending charges and accusations, then you’ll get to realize that you’re a member at a gym that is potentially dangerous or that you’re renting a property from someone who could very well be plotting and scamming against you at this very moment.  Would you trust your credit card information with people like this?  How about your life or your livelihood?  Didn’t think so…

SCUMBAGGED Tip:  For individuals like this to be able to operate under the radar for more than 2 or 3 decades really should raise awareness in the community.  It wouldn’t necessarily be bad if there was perhaps one reformed convict out of 3, but for there to be 2 convicts and 1 in the making, it sure spells a disaster just waiting to happen.  You’ve all been officially warned!