Rachel “Greedy” Grasso is a sick, twisted and manipulative individual.  Grasso is the owner of a failing tattoo parlor named INKspired Studios and in October of 2018, she seized upon a moment that she thought would be her financial salvation.  Rachel Grasso began to monetize her tattoo’s and her business with someone’s death.  She also enlisted the help of a friend (Tia M. Hall) to pose as a psychic who pretended to have received communication from beyond the grave by the deceased.  All in an effort to accrue profits, self recognition and save her pathetic, shitty, little company…

Aaron Hruz passed away suddenly on October 9th, 2018.  Aaron and his mother, Donna, had helped Grasso start up her business and Aaron had helped Grasso when she was at her lowest point in life.  Instead of Grasso simply offering her condolences for the loss, she began instead to offer friends and loved one’s of Hruz a $20 remembrance tattoo.  She then promoted this on her personal & Business FaceBook and began marketing her work and additional specials (Halloween, Holidays, etc.) at the same time.  All of which was done against the explicit wishes of the deceased’s family.

Donna Hruz had specifically asked Grasso on numerous occasions to not use the tattoo that Grasso had personally chosen.  She asked her to please hold off and possibly communicate with Aaron’s father regarding the design.  Against the mothers wishes, Grasso took offense, forged ahead and began charging $20 for the tattoo anyways.  The specific tattoo, unbeknownst to many (shown in pictures below), was a tattoo that Aaron Hruz had on his ass and is not a clear depiction of how he should be remembered, nor how he would have liked to be remembered.

Not So Fun Fact:  Grasso is using some of the cheapest ink on the market, specifically her black ink’s are provided by Scream Tattoo or Iron Sakura Tattoo.  These inks fade rapidly over time, provide lower quality skin transition and give an overall jail house tattoo look and feel.

COBRA Says:  The submissions clearly indicate an unwillingness to respect the mothers wishes and even show blatant disrespect throughout.  Anyone who cannot see why the user decided to submit this article doesn’t understand the love a mother has for her own child.

“It’s sad that Rachel refuses to work with her on a more respectful design.”

One family friend close to the situation had this to say:  “It’s not that Donna doesn’t like the idea of a memorial tattoo, she just doesn’t think that particular tattoo is a good representation of her son. It’s sad that Rachel refuses to work with her on a more respectful design.”

It’s not that Donna doesn’t like the idea of a memorial tattoo, she just doesn’t think that particular tattoo is a good representation of her son. It’s sad that Rachel refuses to work with her on a more respectful design.

Fun Fact:  This scumbag registered her company out of her own home – located at (public Ohio Business Records indicate) 1223 W. 44th St., in Lorain.  She currently receives government assistance, food stamps and other monetary support culminated with the death of others to sustain her meager existence.

Donna Hruz asked, pleaded and explained kindly on numerous occasions why she didn’t want this specific tattoo featured as a memory of her son.  It was featured on his backside for starters.  It wasn’t discussed with family.  It’s not an image that depicts her son clearly or how he would have liked to be remembered.  The lists go on and on.  Read the conversations below for yourself where Donna pleaded with Grasso to not continue with this specific tattoo.

“Maybe if you loved your son he would still be here He’s going to haunt you.”

As if things couldn’t get worse for Donna Hruz, after just having lost her son, getting into a debacle with Rachel Grasso and her son’s less than desirable (putting it mildly) remembrance tattoo, she was also contacted by a psychic.  A psychic who claimed that her son had come to her from beyond the grave and voiced his approval of the tattoo and instructing his mother to be happy and to relax and stop stressing…

After receiving the messages, the grieving mother, in shock, responded the only way she knew how.  This wasn’t how her son talked, what her son would have wanted and she knew that this was a scam.  The screenshots below document the entirety of their conversation, the ending however, is the most troubling.

Tia M. Hall, the fake psychic – who is also close friends with Rachel Grasso and who Grasso had pitched to contact Donna Hruz left the poor mother with a horrible sick statement to end the conversation. 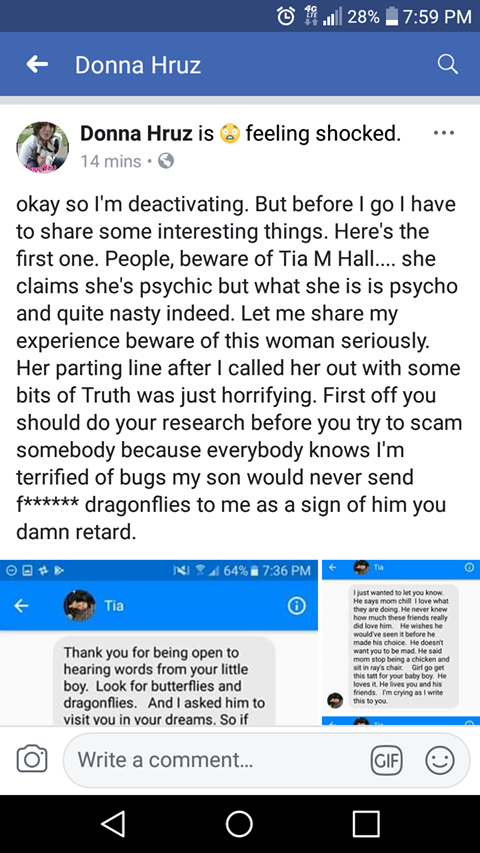 Don’t agree with what Rachel Grasso did to Donna Hruz?  Share your thoughts and opinions on FaceBook Reviews:

Aaron Hruz was lighthearted, open, honest, kind and caring.  He was also a savior of sorts for many.  After his death, Donna Hruz, Aaron’s mother, had received dozens of contacts from people expressing their grief and sharing stories about what Aaron had done for them, about how Aaron had given them much needed support in their times of need.  One person provided a motivational and uplifting message that they had received from him and Donna Hruz shared it in the hopes that it could be used to help someone else get through a dark day…

“Well.  I want you to know that it will not always be okay.  Sometimes life will get dark, and it will stay that way.  Sometimes there are things that happen, that change a person’s soul, an irreparable change that cannot be fought off forever.  And if that ever happens to you, I want you to reach out and never stop, I want you to hold on to your light tightly and let it guide you through what could be a permanent dark. Because you can live with dark inside, but if you lose your light it will consume you. So please, always hold on to your faith that there will be better days, and never let it go.” – Aaron Hruz

The Bottom Line:  Rachel Grasso, INKspired Studios & Tia M. Hall are nothing more than a bunch of scumbags.  For these people, especially Rachel Grasso and her company INKspired Studios to do what they did, to monetize off of someone’s death, to go to the lengths of pretending to be a psychic and manipulate the mother into thinking her son reached out from beyond the grave and really wanted this to continue, is absolutely, positively, unequivocally wrong.

SCUMBAGGED Tip:  Stay away from INKspired Studios, stay away from Rachel Grasso and Tia M. Hall.  These people are willing to go to any extreme lengths to make profits, they are manipulators, liars and downright selfishly evil people…