Elyria is known for it’s beautiful waterfalls, scenic parks, as well as it’s incredible athletics team. However it has also been labeled and noted for its overdoses, scandals, and waves of TERRIBLE people making poor decisions. It seems every week there is some sort of drama thriving through the city.  Which brings us to this weeks scumbag… Danielle “Do Anyone & Anything, The Attention Craving” Caulfield…

Which brings us to this weeks “Scumbag” Danielle “Do Anyone” Marie Caulfield, or more popularly known as Danni “Attention Craving” Caulfield. With all her antics and issues messaging married men, trying to break up couples and severe mental issues have begun to affect more than just her immediate family but several couples in the community. It was brought to our attention by not just one but THREE women and their significant others about her antics.  This article began to practically write itself with their testimonies.

HAWK Says:  Everyone makes mistakes and has a past. However when your manipulative escapades continue, it becomes a choice. A choice that isn’t just, nor approved by any decent standard set by even the lowest of scum. 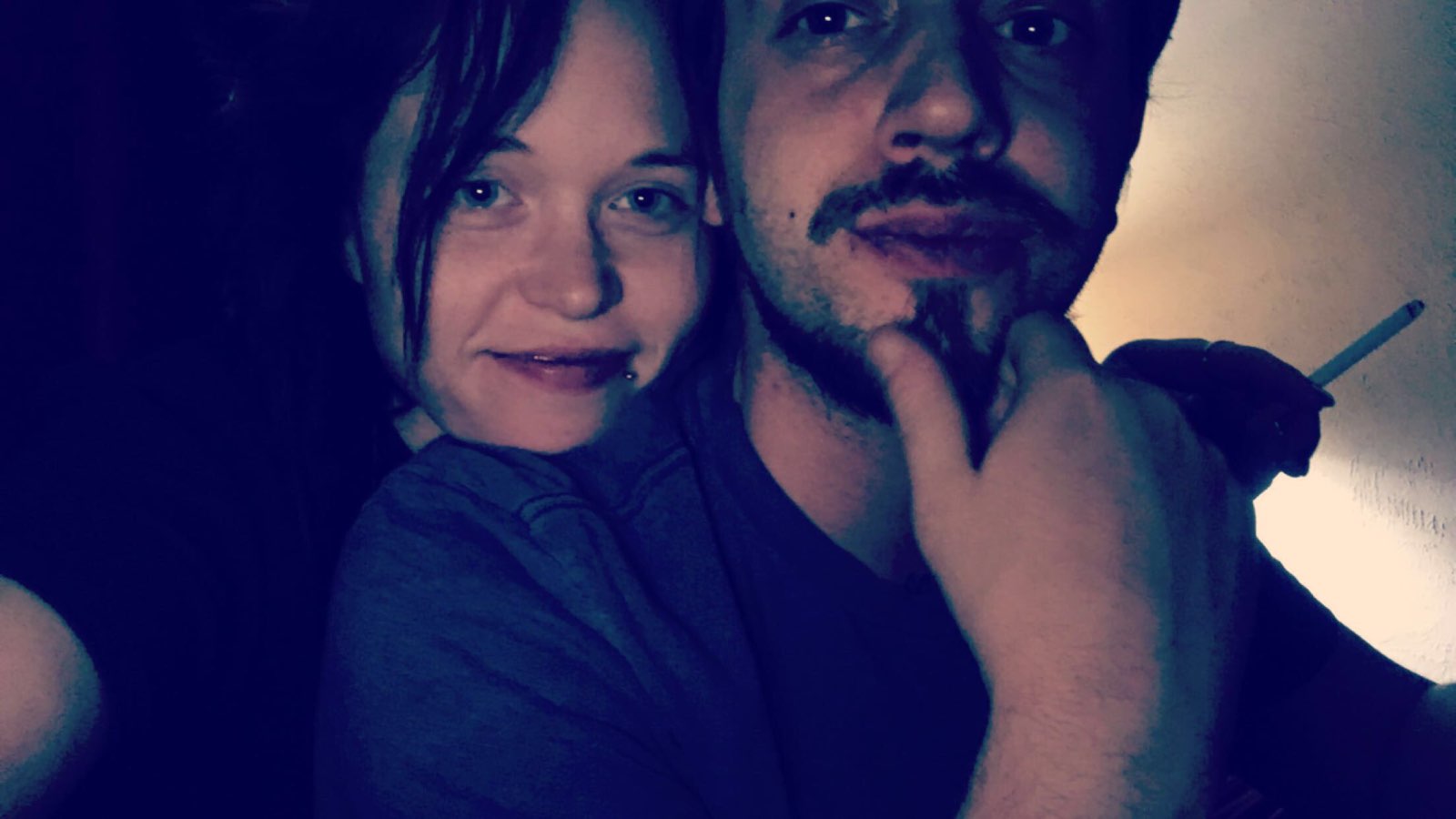 Danielle’s popularity began when she was featured on a well known local news station after her sister Naomi Caulfield passed away from an apparent overdose a couple years ago.  A shock to many close to her.  Condolences were sent and balloons released every year in her memory.  Red flags began swirling when Danielle claimed she was “murdered” and refused to accept the fact of reality that she chose to partake in deadly opiates. This is understandable but not an allowance of the behavior that followed.

Danielle’s path of self destruction and sadistic energy began with her Facebook posts.  Filling the empty voids with countless men. Her favorites being drug dealers, drug abusers, and your typical “wannabe” local gangsters.  Although we cannot verify she was actively using; her “prescribed” medication usually kept her pretty sedated. When taken properly.  Until fits and episodes in between spiraled her into everyone’s feeds. Posting statuses asking “naked men to join her in bed” and other posts claiming to be “blunt” and “outspoken”. Obviously just a tactic seeking male attention on the surface. But underneath it became far more troubling than plain eyes view.

Much like the calm before a storm Danielle would share positive or uplifting memes to scrub up her filthy history. Of course friends and family standing firm for her ignorance justifying with the pain of losing a loved one. As family members should. The ridiculous craving for attention both male and female began affecting her and those around her immediately. 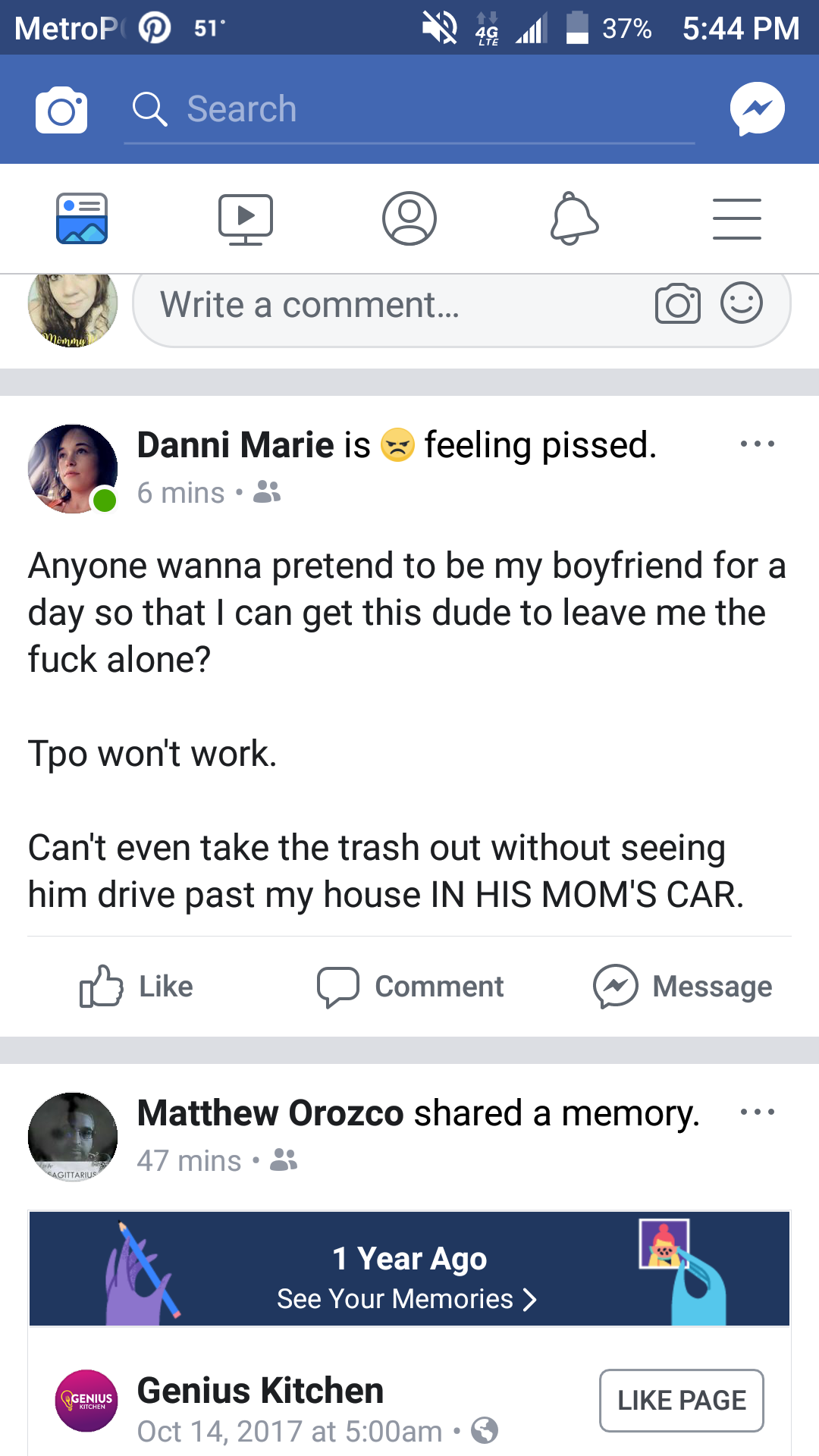 The posts were just the beginning to the never ending chase for everyone to notice her. Whether it was her addiction to sex or the need to fill a void in between partners she proceeded to message men in relationships. While being in a relationship herself. Neglecting any good man or guy trying to nurture and support her… she pursued men that were already taken paying no mind to their wives or girlfriends.

In the vicious pursuit of these men and their attention her own family began to suffer. Giving up her own daughter to the father and allowing the Godparents to raise her on the days she was suppose to have her. Not just any god parents. Tanye Fyfe known for her racial slurs and hatred toward minorities as well as habitual drug abuse has enough trouble raising her own children let alone anyone else’s.  Noting her daughter is mixed and will learn to think this activity is acceptable. 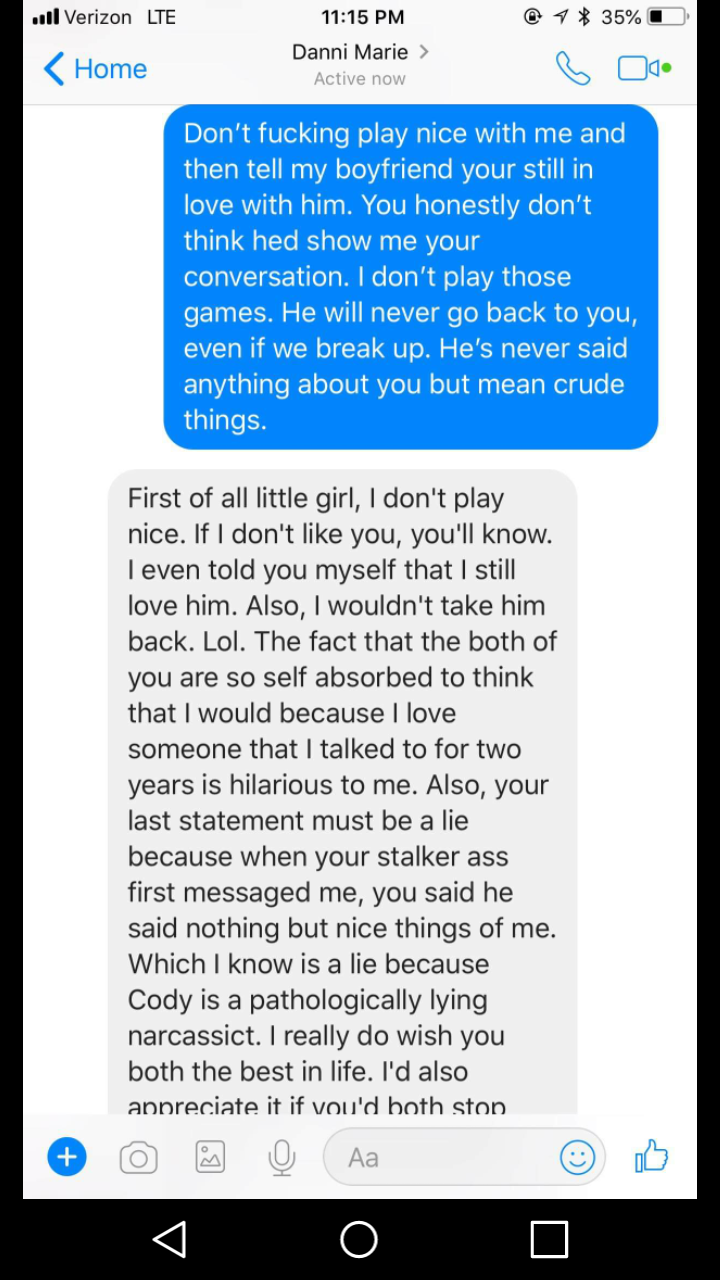 Reports have been made Danielle has been spotted being given money by older men she usually refers to as her “Step Dads” or “Daddy’s” to support her habits and continue her lifestyle. Losing her job at the Dollar General after falsely accusing a co-worker of inappropriate behavior for you guessed it..  MORE ATTENTION.

Furthermore  her rampage came to a screeching halt when she was forced to move back home to help care for sick mother also known for her racial slurs and calling her own granddaughter the “N-Word” although intended jokingly… it is no laughing matter. The move came from an abrupt desertion of her former boyfriend/fiance Cody  J. who refused to comment any additional information on the matter claiming that he just “wishes her the best and that he hopes she gets the help she needs”.

Information gathered from his Facebook claimed she ghosted him disappearing for 3 days, showing up while he was at work to take her things as well as some of his, then mailing his house key. No explanation and no closure. Never to speak to him again after almost a year dating. We can only assume to pursue more relations with men on her friends list. Danielle admitted to hanging out with several men in between dates with Cody including Aaron “Aplus” Allen and neighbors across the street who admitted to sleeping with but not dating her. Small towns become even smaller for girls like this when messaging and aggressively trying to convince men to break things off with their partners. Only to be manipulated tossed aside  and portrayed by her to be toxic. Her favorite insult being “narcissist”  or “narcissitic”  which screenshots show she uses as often as possible to insult those she has wronged.

The Bottom Line:  In conclusion we are hoping this article sheds some light on a very dark cancer growing on the Southside of Elyria. Giving her All the attention she “o so craves”.  Everyone has an opportunity to make things right and correct their wrongdoings. Here’s to encouraging this article pushes her to apologize to the couples she tried to wreck the homes of. As well as the men she has used and consumed of the attention and love they had to offer.

SCUMBAGGED Tip:  Elyria can be an awesome city when people come together for greater causes. Encouraging anyone that’s ever been Scumbagged to use it as a tool to better their lives. Also to serve as a safety or warning label for innocent people just trying to enjoy their significant other without interference.