Brian Griffith, the owner of Sheffield Automotive Sales who was featured on Scumbagged.com months ago for a racist tirade he launched against Andrea Reed is back in the news again.  This time for a blow up at a local Dunkin Donuts where he proceeded to scream derogatory remarks, flip off workers and would be customers while pulling his pants down and exposing himself.

Griffith, who has been fairly silent since the March 9th, 2018, article that caught him on a highly profane and racist audio recording apparently hasn’t learned his lesson.  The business owner faced a huge backlash and saw his companies reviews tank to a paltry 1 star on both Google, Facebook & Yelp.  His automobile sales reportedly dropped by 85% and he was and still is in jeopardy of losing his business.  As if that wasn’t bad enough, for a two week period Mr. Griffith had camera crews and news organizations hounding him, with thousands of angered Lorain County residents calling his phone and showing up to his place of business.  For any normal person, all of these things would have forced an immediate course correction, but as we know, Brian Griffith is far from normal…

An eye witness and employee of the Dunkin Donuts who was on the scene when the November 23rd event transpired shared what she witnessed.  She has also chosen to remain anonymous due to her fear of retaliation from Mr. Griffith.

“…he pulled his pants down and mooned her.”

“There was a lot of screaming in the parking lot and some asshole (Brian Griffith) was yelling at this woman because she cut him off, calling her a white trash bitch and cunt.  The lady then pulled out her phone and started recording him and he pulled his pants down and mooned her.  Then another employee went to talk to him and he started screaming at her and a few minutes later the Amherst police arrived.” 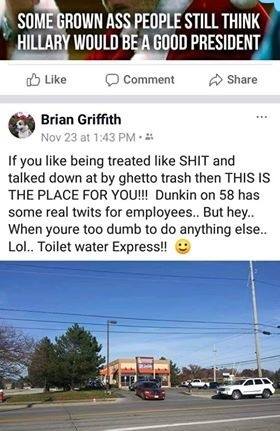 “The first lady he was yelling at was white, since he called her a “white bitch” and another employee was black – he told her that she was “ghetto trash”. 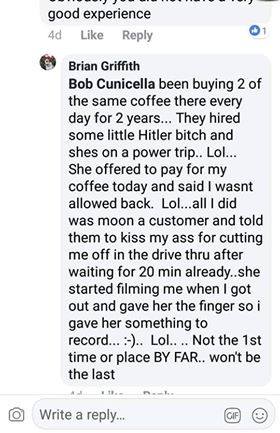 “Again, I would really like to remain anonymous. I looked at your article on the guy and the history of violence towards women makes me scared to go full on public.”

COBRA Says:  No worries, we take the anonymity of our submitter’s extremely serious.  Your identity is safe with us. 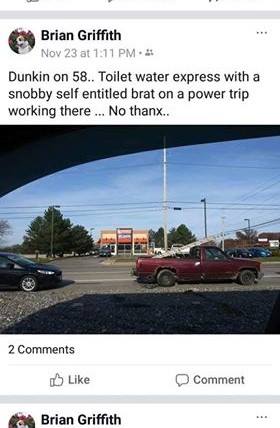 Through his personal Facebook account Brian Griffith even admitted to exposing himself and going on an anger and racially filled tirade.  He stated “All I did was moon a customer and told them to kiss my ass for cutting me off in the druve thru after waiting for 20 min already..she started filming me when I got out and gave her the finger so I gave her something to record… 🙂 Lol.. .. Not the 1st time or place BY FAR.. won’t be the last”.

COBRA Says:  This guy just walks all over people wherever he goes.  Talks down to anyone who has a normal job for a living and makes condescending, belittling and racist remarks at the same time.  The crazy thing is that he’s still in business…  Fucking scumbag.

Brian Griffith is a convict and womanizer.  He has a long history of offenses and drug use.  In the previous article that was launched on him, his entire criminal history was outlined as well as his racism that he showed towards a would be customer.  That original article can be found below.

The Bottom Line:  The Dunkin Donuts located at 5494 N Leavitt Rd, Lorain, OH 44053 on the border of Amherst did the right thing by banning Brian Griffith from their premises.  “Anyone who treats customers and employee’s in this manner will not be tolerated and not welcome at our location”. – Employee.

SCUMBAGGED Tip:  Hey Brian, when will you learn?  Stop looking down on people.  Stop being so judgmental.  Keep your racism to yourself.  These same people who you talk shit about are the people who prepare your coffee’s, these are the people who will drive you in a LifeCare Ambulance in the event you have an emergency, these are the same people who buy your cars and put money in your pocket.  You deserve nothing more than to be held accountable for your actions – because they are atrocious and we hope our submitter’s continue to follow you and report on you whenever you step out of line.