Greater Cleveland attracts as many as 17 million tourists per year, a huge focal point for many who come is the Rocking Roll Hall of Fame, the Cavs, Indians, Browns and other attractions in downtown.  Today, however, tourists were greeted in a despicable fashion, one that doesn’t remotely begin to represent the city.

Right off of Public Square, smack dab in the middle of Downtown Cleveland only a few feet away from the JACKS Casino and the Renaissance Hotel a group of IUIC Racist African Americans could be found sporting various propaganda signs that held some of the most extreme views.

Scumbagged.com was there and caught one passerby who shared his opinions with the group.  It ended with the passerby getting on his bike and riding off to the group laughing and one man stating “What is judgement though? Judgement gets handled from earth!”

WATCH THE VIDEO BELOW:

You white folks are all going to hell, There is no salvation for you!

When asked, the fanatics shared their purpose and mission behind their protest.  One member stated “White folks such as yourself need to be schooled on knowledge, you’re here to die, we black folks are going to heaven, you whites are all going to hell, there is no salvation for you.”

COBRA Says:  These individuals are serious scumbags and the sad thing is that they have a huge following.  Millions of people follow the IUIC, they are nothing more than racist black hebrew israelites. The signs that they were holding were atrocious, these people aren’t just racists or scumbag, they are borderline satanic.

Some of the signs that were spotted said derogatory things such as “Get Ready for your Future ‘WHITE FOLKS’… Nuclear Fire & Eternal Slavery” and one that classified caucasians as “Cave Dwellers”.  One sign even depicted a white man, woman & baby in chains.

The group declared that according to the Holy Bible they were there to speak the truth about various prophecies and what their interpretation of the Bible verses meant.  Citing the following versus in The Bible:

EXODUS 21:16 – And he that stealeth a man, and selleth him, or he be found in his hand, he shall surely be put to death.

MICAH 4:1-2 – But in the last days it shall come to pass, that the mountains of the house of the Lord shall be stablished in the top of mountains, and it shall be exalted above hills; and the people shall follow on to it.  And many nations shall come, and let us go to the mountain of the Lord, and he will teach us of his ways, and we will walk to his path: for the law shall go forth of Zion, and the word of the Lord from Jerusalem. 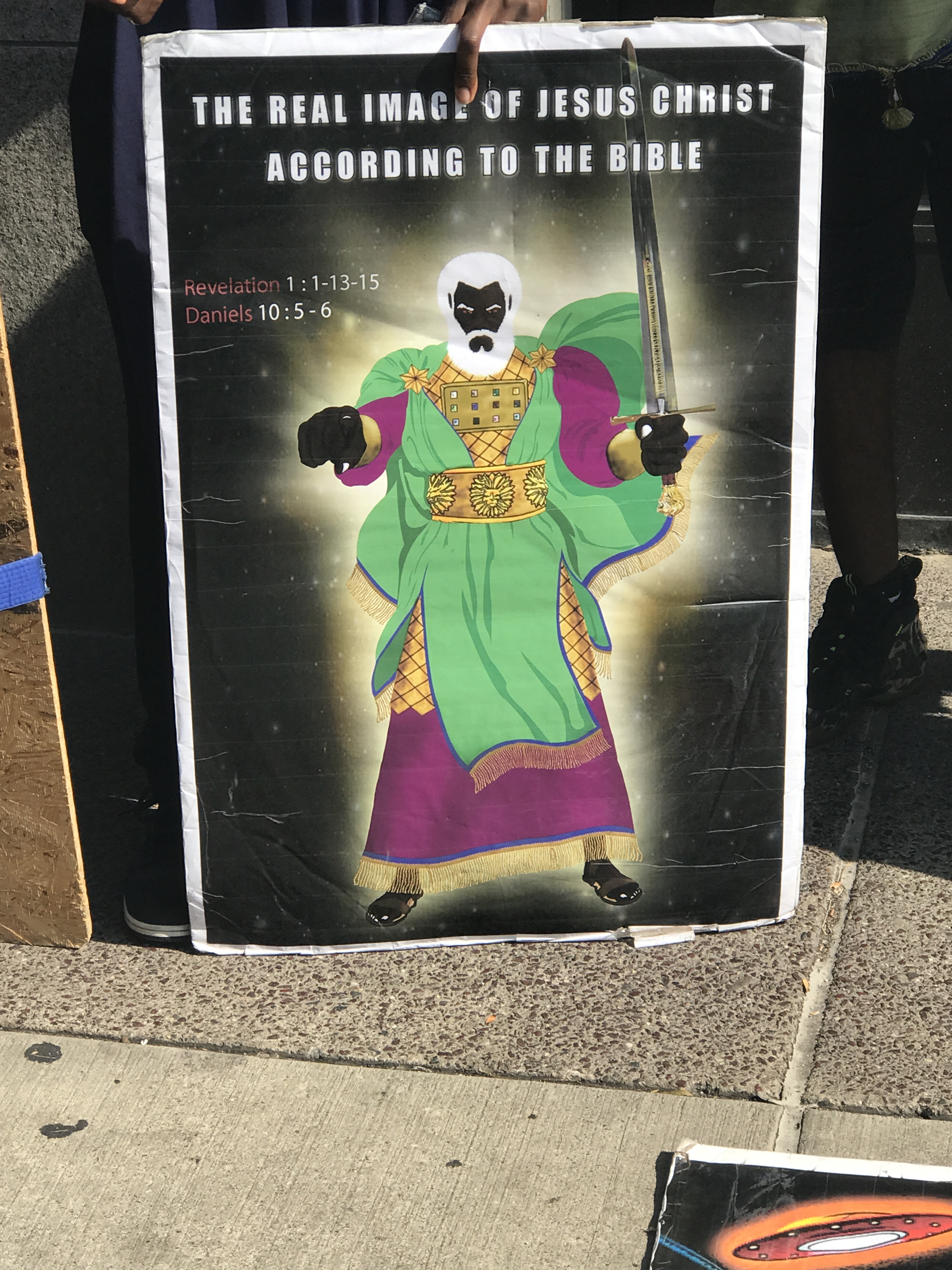 JER 12:16-17 – And it shall come to pass, if they will diligently learn the ways of my people, to swear by my name, The Lord Liveth: as they taught my people to swear by ba’-al; then shall they be built in the midst of my people.  But if they will not obey, I will utterly pluck up and destroy that nation, saith the Lord.

MICAH 7:10 – Then she that is thy enemy shall see is it, and shame shall cover her which said unto me, where is the Lord thy God?  Mine eyes shall behold her:  Now shall she be trodden down as the mire of the street.

The individuals behind this protest call themselves the IUIC which stands for Israel United In Christ.  They believe that blacks and hispanics must learn the truth that they (and only they) are the Biblical 12 tribes of the nation of Israel. Their twitter page reflects that “Negroes, Hispanics and Native Americans, ARE the Children of ISRAEL. We made God angry, and he put us into slavery. It’s time to come back to God.”

SCUMBAGGED Tip:  Saying things like those who subjected those to slavery will be sent to eternal damnation for their ancestors crimes is outrageous.  If that’s the case, then every single race and creed would face this same fate, for all colors subjected others into slavery at one point or another throughout history.  Racism and supremacy is a nasty abhorrent evil that has inserted itself into the hearts of many whites and many blacks and things like this only create further divide.  Perhaps this group should start preaching peace and understanding and trying to cross the race barrier instead of trying to further deepen it.