AKRON, OHIO:  Chief Clarence Tucker of the Akron Fire Department has been caught in a lie and managed to contradict himself in just a few short paragraphs in an official letter that was sent to Scumbagged.com.  In his own words the Chief flip-flops from not having a new policy in effect, which specifically took aim at an article that said otherwise and also issued a direct threat to us if our user submitted article wasn’t retracted.  The full entirety of the Chief’s letter and the breakdown is contained herein, with no retraction to follow.

On May 15th, 2019, an EMT at the Akron Fire Department submitted an article titled “Death Toll Rising: Akron Fire Department’s New “Medical Treatment Refusal” Policy Results in 5 Death’s in Just Two Days”.  In the article, the county employee raised serious concerns regarding a new policy that developed at the AFD. The new policy (per the EMT and now confirmed by a written statement from the Chief contained within) showed an alleged increase in deaths and the risk of additional deaths as a result of non-transporting overdose victims to the hospital, ie; the new policy.

Just five days after the article was published, Clarence Tucker, Chief of the Akron Fire Department, dispatched a letter to Scumbagged.com.  In the letter, which was dated May 20th, 2019, he demanded a retraction or else we would face ‘additional steps’.  The Chief stated that the article was false in many instances, specifically in relation to the new policy – stating that there was not a new policy in effect.  That’s a lie.

In paragraph two (featured in bold in the full statement below) the Chief stated “There has been no policy change or instruction to AFD personnel to not transport overdose patients.”  Yet, in paragraph five Chief Clarence Tucker stated “The patient refusal policy of the City of Akron is not unprecedented, in fact it is consistent with refusal policies regionally and nationally.”  He also went on to add “Akron Fire Department’s medical director and EMS administration reviewed multiple refusal policies before our recent change.”

The letter below was sent to Scumbagged.com by Chief Clarence Tucker of the Akron Fire Department on May 20th, 2019. 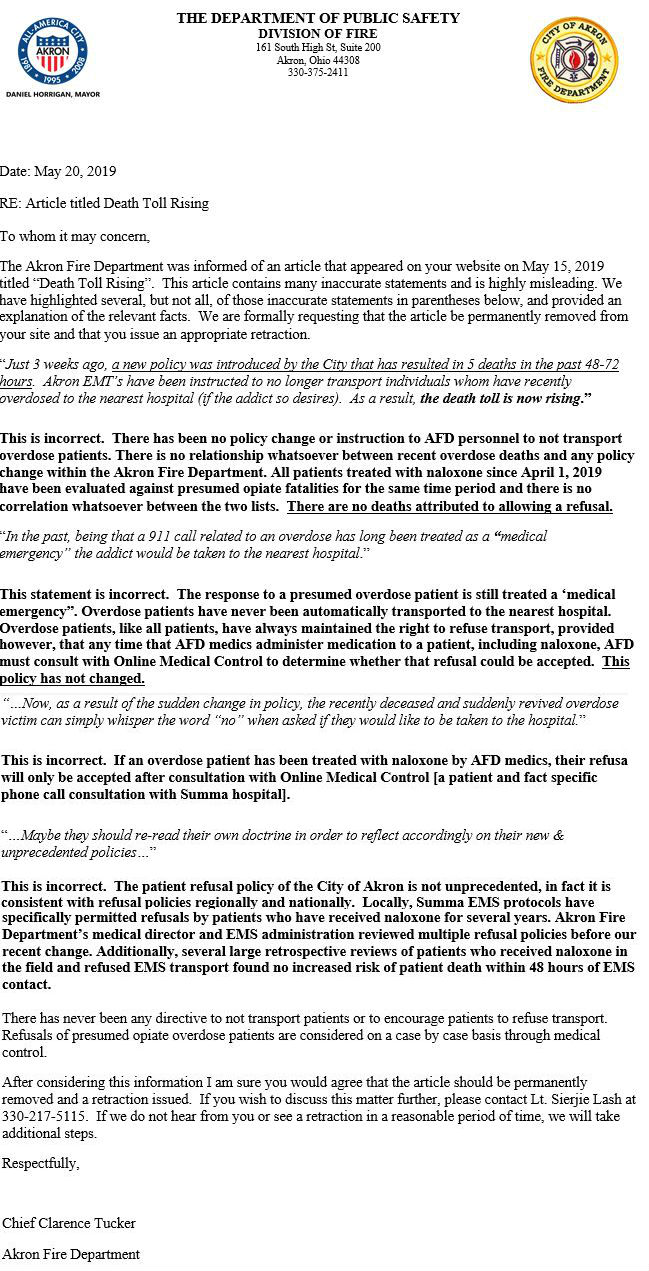 COBRA Says:  As a fire Chief, why would you attempt to cover-up, deny or justify any policy that would potentially result in the possibility of not saving another human life?  Chief, you managed to contradict yourself in just a few short paragraphs, as a result of your contradictions the entirety of your letter is mute and holds zero weight with us.  We will not be issuing a retraction just because you or your department or the city “demands” so or threatens us.  In fact, we have other things in mind…

If the city of Akron and the Chief would like a retraction, we are willing to oblige on one condition and one condition only:  Once the city of Akron retracts it’s new policy (or policy that they say doesn’t exist, that really does – per the Chief) then and only then will we retract the original article.  Nothing more, nothing less, eye for an eye.