On July 12th, 2017, Scumbagged.com was born.  We created this site with the sole purpose in mind to provide individuals a safe and effective avenue to express themselves.  For many, Scumbagged became an outlet of hope – one that would afford each and every submitter the opportunity to finally be heard for the atrocities that they had been subjected to in their lives.

Readers Note:  This article puts on full display a recent surge in attacks against our members, our ex-webdesigner, our affiliates and our attorney in an attempt to silence our First Amendment rights.  We have included an audio recording in this article, as well as a video, screenshots and more.

Immediately our website shattered any and all expectations, with some articles fetching more than 50,000 unique views in a 24 hour period.  The effectiveness of Scumbagged.com was on full display:

In addition to the great accomplishments listed above, Scumbagged is the fastest growing news/blog in Northeast Ohio.  Consistently our readers share more than Cleveland.com, TheChronicle, The Mourning Journal & even Fox8 News.  Our user submitted content is in high demand and the numbers below don’t lie.  These are real unaltered statistics from our website.  Keeping in mind that we average less than one new article per day, while our competitors publish 10’s of new stories.  We’ve also only been around for about 8 months…  Just imagine where we will be at in another year!  Note:  PJPNewspapers.com is for the North Ridgeville & Avon Lake Press. 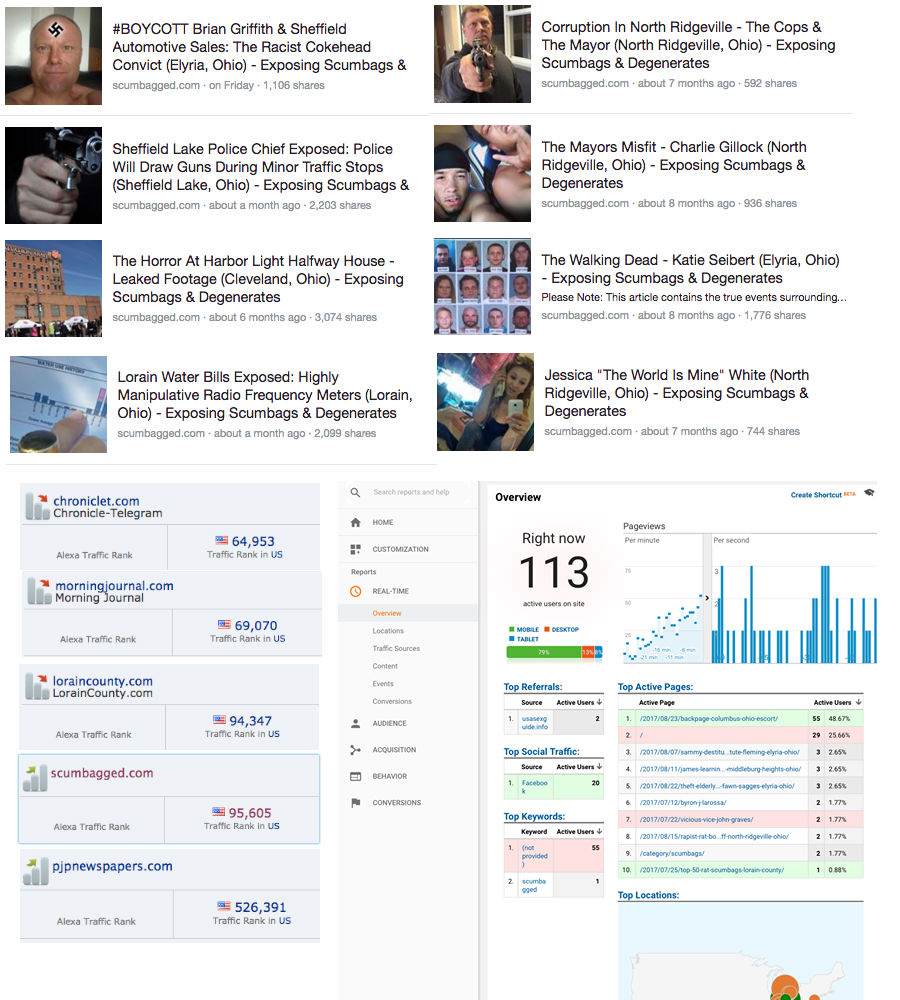 As with anything, all the feats that we accomplished in a short period of time also had their downfalls.  We received exactly 18 death threats, hundreds of complaints, 6 legal notices (cease & desist letters) and many urgent dire requests of removal from individuals who were featured on our site.  Our Scumbag Tip Line had individuals calling in almost every single day, with many leaving us threatening recordings or text messages.  All of those things came with the territory of operating a site like Scumbagged, so we shrugged it off and didn’t press charges on anyone, we just let Scumbagged be Scumbagged.

However, what we can’t and simply refuse to ignore is when our submitters or our old webdesigner or our attorney or our contributors become attacked.  We have never and we will never press charges on anyone, except in the instance to defend our members and our submitters.  Regarding the most recent round of threats and intimidation tactics, our official response can be found in the YouTube further down this page.  We have a zero tolerance policy for this type of behavior and we will not allow our users to be silenced.

The audio below was a recent voicemail left on March 8th, 2018, to our original webdesigner.  In the audio you can clearly here them referring to Scumbagged and making threats of harm against him.

The images below depict a threatening email sent to our attorney as well as comments that have been left on Scumbagged.com.  Regarding the email, there was a situation that developed in the days following & Mr. Stryker was forced to file charges in Federal court related to cyber stalking. 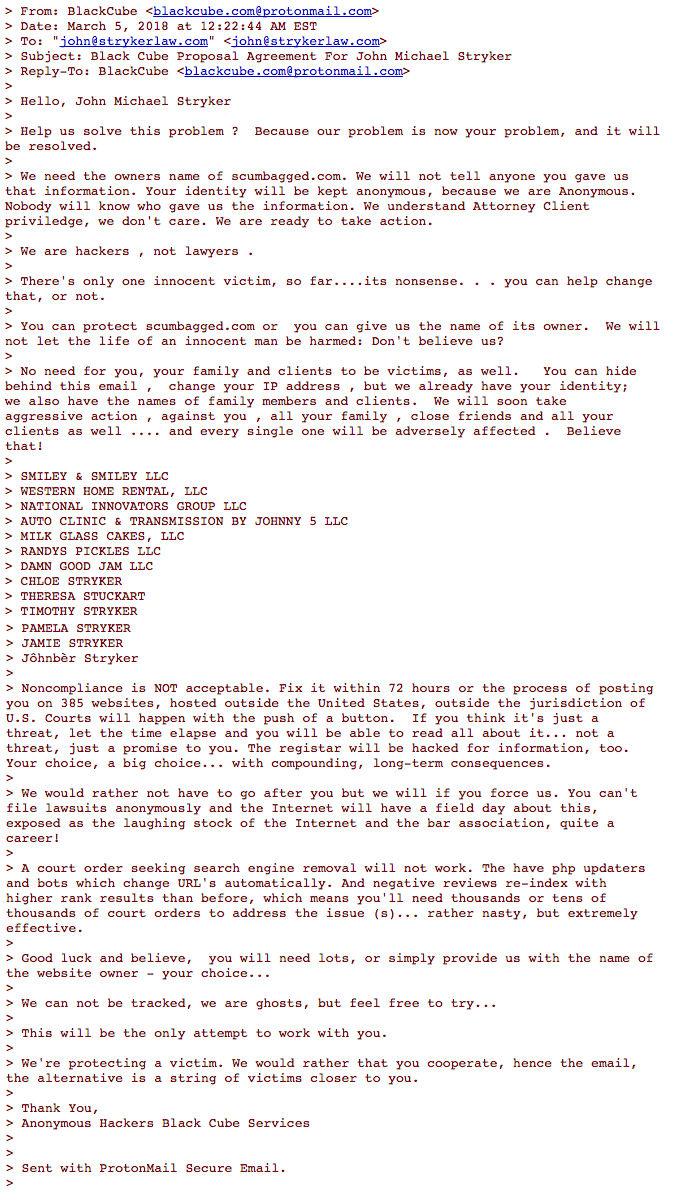 The First Amendment provides individuals who use our site to push the limitations of their Freedom of Speech.  Defamation of Character, Libel & Slander do not come into play UNLESS there are untruth’s told about an individual, at which time, there must also be accompanying damages in some way shape or form.  You MUST be able to provide PROOF that the statements are & were false.  In addition, Scumbagged.com and National Innovators Group LLC., cannot and will refuse to be held liable for any of our user based submissions.  We are explicitly protected under the Communications Decency Act of 1996 which specifically excludes us from prosecution in any litigation process under Federal Law.

To the attorney’s who attempt to bully us into submission:  Please don’t feel bad when we tell you to go fuck yourselves, your not the first and you wont be the last.  Your big words, fancy letter heads and power law firms mean absolutely nothing to us.  You have no clue of the waters that you are setting sail in, the First Amendment is one of the most cherished rights for an American Citizen to have and if you were to pursue any, even the most outrageous of articles, there is a high probability that you will lose.  For reasons that most of you attorney’s out there are already aware of.

To the scumbags who send death threats to our faithful followers:  Your cellphone companies will be subpoenaed, your internet service providers will be subpoenaed and you will be exposed.  Once that happens you will have nobody to blame other than yourselves.

The Bottom Line:  We’re not going anywhere, we’re not fucking leaving, get used to it.

SCUMBAGGED Tip:  If you don’t like what’s posted on Scumbagged.com, it’s time to take a serious step back and review why someone may have submitted you.  Is it because you’re a true piece of shit?  Did you really call someone a “ni**er” on a fucking voicemail recording? Did you really rob a client?  Did you really put your hands on someone in an illegal and unprofessional way?  Did you really sell someone drugs that killed them?  Stop being a scumbag and you won’t get Scumbagged, it’s simple.