Tayllor Swift is a greedy, vindictive, hateful & spoiled little brat.  She’s trademarked her own kittens names, she sues everyone to kingdom come, she won’t make deals with small companies (out of greed), she has a lot of apparent hate in her heart.  In addition, the country singer turned pop star has largely remained silent in regards to political affiliations, but even that all came to an end recently.  Swift, now supremely supports the Democratic party candidates running in Tennessee for the upcoming midterm elections.  Here kitty kitty…

1.)  Taylor Swift absolutely hates Kanye West and 2.) for the most part any previous ex-boyfriend that she has ever had.  She’s gone on to make song, after song, after song about the men in her life that hurt her, or abused her, or left her, or cheated on her, or farted on her.  Yet, her political affiliation(s) always remained silent…

Swift’s political affiliation and sudden representation of the Democratic party is nothing more than a direct opposition to, yep you guessed it, Kanye West’s staunch support of President Donald Trump.  Taylor Swift absolutely hates Kanye West.  She hates him for yanking the mic out of her hands a decade ago, she hates him for the lyrics “I made that bitch famous”, she hates him for who he politically supports and well for just being Kanye.  From friend to foe, she’s a vindictive, hateful individual who will stop at nothing (words, lyrics and otherwise) to get her point across and make herself feel valued and more important than she really is.  You’re a fucking singer Taylor, a singer.  You sing, that’s it.  Sing. 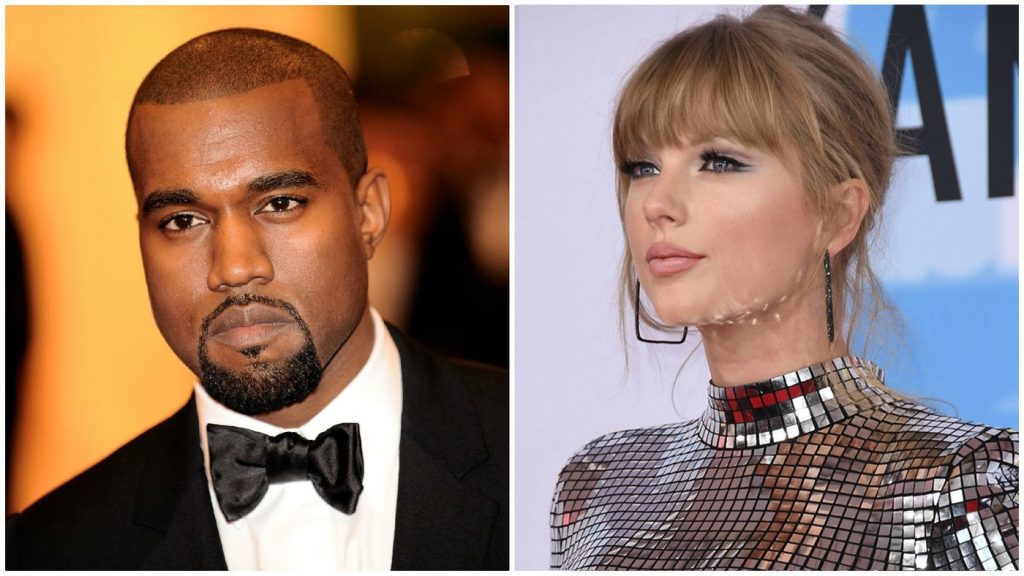 COBRA Says:  People idolize individuals in sports and entertainment far far too much.  She has skill in vocals, but that . is . it.

Even when she was earning upwards of $60,000,000 per year, enough wasn’t enough.  The greedy, spoiled brat pulled her deal with Spotify over a few pennies.  Instead of making a deal that was beneficial to both, she walked away and told the music streaming service to remove her content effective immediately.

Swift is also extremely notorious for chasing down and hunting (literally) individuals who have used her music songs in videos posted on Facebook.  So much so in fact that if you’re at an aquarium, a ball game, or simply listening to the radio and make a quick 1 minute clip of the festivities with her song playing in the background – your video will be reported for copyright infringement.  Sure this happens with a lot of other content, in fact it’s highly common and Facebook will present you with the option to proceed with caution if it’s a copyrighted work.  You click the “proceed” button and all is well.  Not so with Taylor Swift, she has a far higher rate of individuals being banned from the social networking site due to false copyright positives than ANY other music artist, simply because she will sue the living shit out of anyone and anything that even remotely uses her work – even if it’s in the free spirit of things and simply recording during a family get together, event or vacation.  Sheesh…

A collection of some of Google Image’s best Taylor Swift meme’s.  Enjoy! 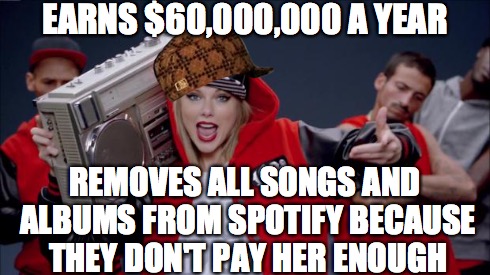 The Story of Swift & “Kitty”

Due to trademarking issues (yes she trademarked her cat’s names) we have had to utilize a name other than her true identity.  In this instance, Swift’s cat is referred to as “Kitty”…

Cat:  (Using the litter box) I can’t forget to wipe off all the litter from my paws!

Swift:  Fluffy why didn’t you wipe your paws off, how many times do I have to tell you?

….. goes back into litter box

Cat:  (Purr) I will not forget this time.

….. sounds of bags, noises off in the distance, oh the curiosity!

….. Taylor grabs a solid 24k gold pen off of her credenza.

Swift:  (Writing vigorously)  I once had a cat, a cat named kitty, she used the litter box and kept coming out shitty, I told her once, I told her twice, wipe off them paws or…

Cat:  (Looking through window)  What is she doing?  Taylor….

SCUMBAGGED Tip:  Interesting submission, unsure as to what the heck it is entirely, but eh’ freedom of speech right?

The Bottom Line:  Well we might just have to make a satirical story aspect to this site after this “rant”.