Matthew Berdyck, a rogue environmental activist originally from the city of Akron is now a potential national security threat.  Two days worth of threats of dirty bombs & threatening to launch an attack on a Nuclear Power Plant have lead up to this article.  Mr. Berdyck is currently on his way to the Perry Nuclear Power Plant where he may attempt to launch a terrorist attack.  At 5:42 PM on 10/14/2018 Mr. Berdyck sent an email to Scumbagged.com stating that he was en route to the Perry Nuclear Power Plant.  He also provided a screenshot of his Ohio Turnpike ticket.

In an email (see screenshot) sent to Scumbagged.com, the FBI and numerous other recipients on 10/12/2018, Mr. Berdyck outlined a sinister plan to gain attention for his beliefs.  In that initial email he stated “I’m going to start committing aggressive and eye opening acts of ecoterrorism at US nuclear facilities until the FBI is forced to investigate this series of events.”

Article Update:  As a result of this article the F.B.I has reached out to Scumbagged for assistance in this matter.  We have provided the investigators with the contact information of individuals who are part of the MBVR group and furnished additional information to help aid them in any potential criminal action that may or may not be taken against Matthew Berdyck.

He also went out to state the following:  “I have nothing left to lose. You’ve pushed me to this level. Let’s go you corrupt assholes. I’m going to start by publishing the instructions for building a dirty bomb and the location of the nuclear materials required to build it. It’s become abundantly clear that unless create a national, loud, and viral incident, that no one is going to listen.”

In another email dated 10/13/2018 Berdyck ranted about various cover-ups and the need to gain attention at any and all costs.  He stated the following:  “I’ve had enough. If the US government wants an all out ground assault ecoterrorism war with me, as an act of pure civil disobedience, orchestrated to force the media to get involved and expose what Erin and Bob are doing, then let’s go!!!”

In our response to Mr. Berdyck we asked him if his account had perhaps been manipulated and that the emails could have been sent from someone else?  We also urged him to refute the emails if that was the case, otherwise we would be forced to run an article alerting the community and authorities.  His response was as follows.

the directions for a dirty bomb are already on Google

“As far as what you can do to me, be very careful, because the location of these fuel rods is already published on the DOE website, and the directions for a dirty bomb are already on Google.”

The screenshots below have been documented and serve as evidence of the entirety of the conversations between Matthew Berdyck, Scumbagged and other recipients. 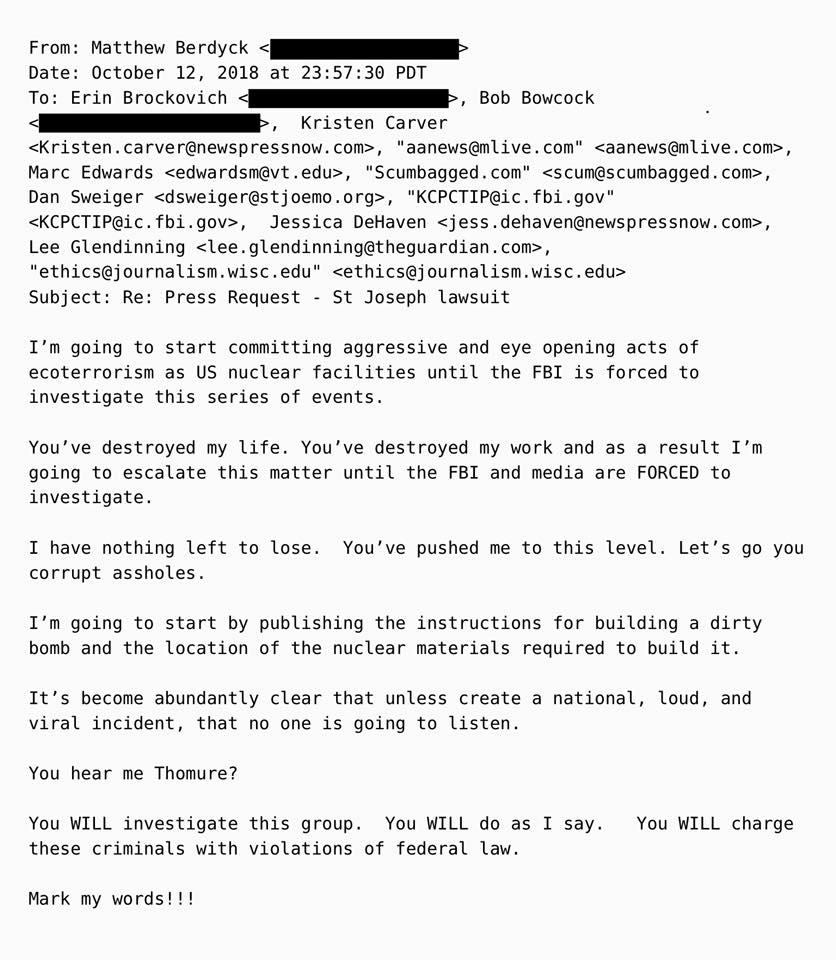 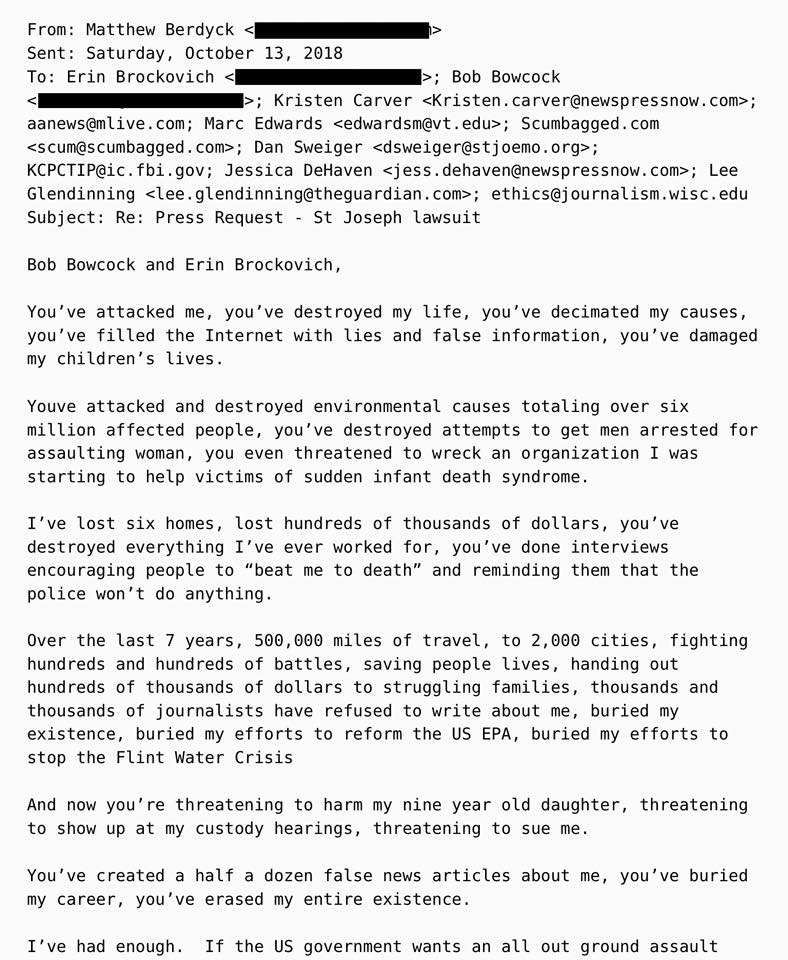 Mr. Berdyck is a self-proclaimed activist, film maker and entrepreneur.  He created the company Super Fund Research (www.superfundresearch.org) in an effort to investigate and aid cluster cancer research.  He also created the Daily Independent Journal (www.dailyindependentjournal.com) where he essentially launched digital attacks on dozens of individuals in a media masked landscape.

Berdyck was featured on Channel 5 News Cleveland in the past for his environmental documentary into one of the largest Super Fund sites in the country.

The Facebook group MBVR is dedicated to those who have been stalked and harassed over the past 5 years by Mr. Berdyck.  The list is extremely long and in particular, the MBVR Facebook page contains full-length audio interviews with eight of Berdyck’s current victims (all accessible through a SoundCloud link). The shortest is 18 minutes and the longest is an hour.  Those on the site are a 33-year veteran police officer and FBI agent, a television journalist who is regularly on cable television, broke the Michael Jackson molestation case and wrote a book on it, Erin Brokovich’s environmental consultant for 22 years, an Ohio filmmaker nominated for four local Emmys, a cyber-bullying expert who helps other victims, a woman who suffered severe abuse as a child, a local journalist and podcaster and someone who wishes to stay anonymous.

It is unknown wether Matthew Berdyck will carry out an attack on the Perry Power Plant – however his emails should be taken seriously.

The Bottom Line:  Matthew Berdyck should be considered extremely dangerous.  He has knowledge and is funded by an extremely wealthy individual named Alex Huang.  He is currently en-route to the Perry Nuclear Power Plant in Ohio.

SCUMBAGGED Tip:  Individuals are urged to contact local, state & federal law enforcement if they see any suspicious activity in and around the Perry Nuclear Power Plant.