Elise Janais Brown is a 34 year old cheating wife (married to David Brown). She is a true abusive sociopath and narcissistic to the core! On Oct 18, 2018, Elise’s own daughter had enough of having to live with that vile, evil witch, so she hung herself, just so she could get away from her abusive mother.

Elise is now playing the part of a martyr, getting on all the local news channels, telling her side of the story and trying to cover up her dirty laundry, as well as her dirty house of horrors that her daughter was exposed to.  She is the prime example of a neglectful mother and an abusive wife.  She only thinks about herself and as a result she’s brought those that are the closest to her down.

The daughter ran away and attempted suicide before, because her life at home was so miserable, having Elise for a mother. The teen daughter was nothing but a nanny to her two younger sisters, while the mother went out chasing after black cock to cheat on her husband with.

Elise in the News:  Mother of Knox teen suicide victim: The system is ‘broken’

Elise Janais Brown is nothing but a lowlife, white trash, gym whore who plays the part of the loving, devout Christian wife and doting mother. It’s all bullshit! She is a lying hypocrite! Elise uses the church to cover up her sins. She is a piss poor excuse of a mother, and a promiscuous, money hungry, cheating wife. Avoid this piece of shit! Elise Janais Brown is only after money, dick, admiration and attention.

SCUMBAGGED Tip:  If you are being cheated on by your wife It’s officially time to move on.  Don’t stay in a relationship that’s going to mentally abuse you and drag you down.  You’ll be deprived of emotional connection if you don’t. 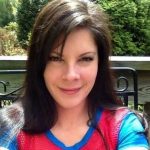