NORTH RIDGEVILLE, OH – For many, the coronavirus pandemic means stocking up on food, taking less risks going out in public & ultimately spending quality time with family.  The same cannot be said about ‘Exhibit A’, his associates nor the multitudes of social interactions that are transpiring throughout the process.  This is a sickness that under current circumstances places the general public at extreme risk due to the multitudes of places and people involved at all times, ie; what we call “The Ripple Effect”.  ‘Exhibit A’ is the primary subject of this expose and the essential source of information contained within.  Detailed cellphone messages show extensive drug involvement that is conducted with local businesses, business owners, married women, young mother’s and many of the city’s residents.  Evidence in the form of dozens of screenshots and drug related imagery sheds light into the ripple effect being caused within the North Ridgeville community.

Who is ‘Exhibit A’?  Clint Richmond.  A 35 year old prolific drug dealer & user who lives with his mother in North Ridgeville (within walking distance of a school).  A man who has been raided numerous times and has had no substantial or lengthy prison terms as a result of those semi-recent raids.  Richmond has continuously claimed to be a drug user in the courts and as a result has served many brief stints in jail, rehabilitation centers and outpatients.

North Ridgeville’s rampant drug use starts and begins the same as it does each and every month, except during the current state of affairs, this seemingly invisible addiction can be a matter of life or death for anyone and not just the user this time around.  Clint Richmond is prescribed Xanax, which he then retrieves from a local pharmacy in North Ridgeville.  Prior to making his trip to the pharmacy, Richmond has met with dozens of individuals making drug transactions and in some cases has stayed up for days on end.  He then takes his prescription and now trades it for more drugs.  The drug dealer whom has agreed to the trade will then venture into the city after he’s already made numerous other rendezvous with clients elsewhere in Northeast Ohio to deliver the goods.  From there it’s off to the races for Clint and many others in the city, certainly not focusing on hygiene, dirty money or safety precautions – but only to reach the next high. 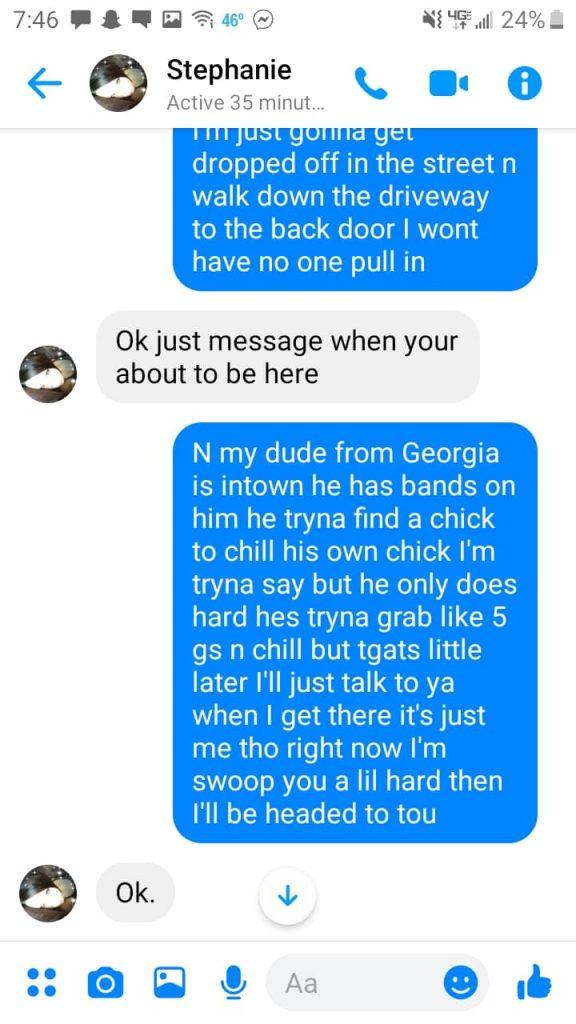 What happens next is simple, more money is needed.  This is achievable thanks to a large swath of individuals involved in a fraud scheme that targets local area Home Depot’s & Lowe’s department stores that are literally robbed daily of various tools and supplies.  These items are then returned by “runners” at other locations for gift cards, which are then in turn sold for cash to obtain more drugs.  The cash is given by other stores for the gift card, or individuals from Craigslist, business owners or sub-contractors looking for a cheap way to purchase their next jobs tools (or for resale purposes).   Drugs are then sold, bartered and traded within the city to the masses.  As the use continues, the volume begins to decrease and more methods are deployed to maintain the high and quantity.  Business owners get involved in the action, some seeking drugs, others becoming the unfortunate victims of the vicious cycle.  All in all, the amount of individuals exposed to potential COVID-19 now surpasses that of any normal would-be shopper who goes from point A (their home/residence) to point B (the store, gas station, pharmacy) and back.

COBRA SAYS:  What you are about to read is not based on scientific data, research or any public documentation – it is simply backed up by evidence pertaining to the essential points of this article…  Social distancing has been put in place to reduce the transmission rate via minimal exposure to the population.  What you will read is filled with back-history and information provided by the submitter that will shed light into the inner-workings and perilous daily activities that drug users in your community are taking, activities that place you at a higher risk as a result of a higher infection possibility from those who are disregarding social distancing.  North Ridgeville is specifically cited in this instance as a result of these individuals primarily residing in or traversing to the city.  This same type of activity is transpiring with other individuals inside of North Ridgeville as well as other cities across America.  This is what we here at Scumbagged like to call common fucking sense and why everyone should just stay the fuck at home! 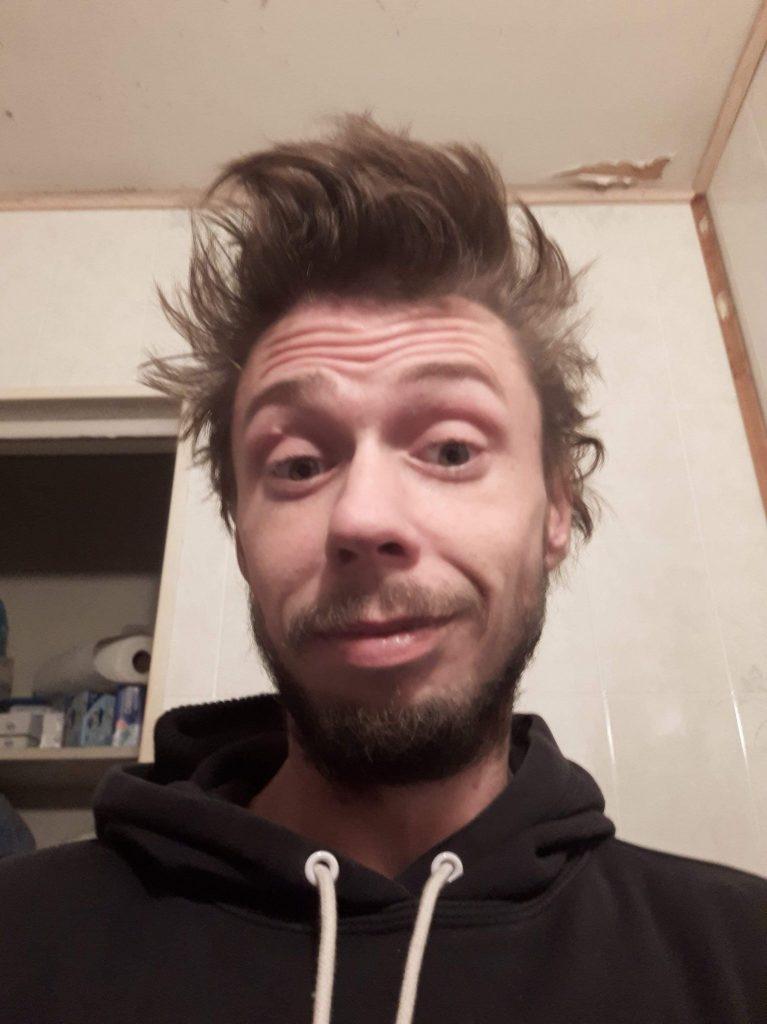 He’s stolen cash from deliveries when he worked at “The Mattress Man” in Cleveland and even went further as to steal power tools, shop vac’s, carpets, signs, furniture, food & landscaping equipment from the companies owner, Billy.  While still employed by “The Mattress Man” & (redacted) Richmond would steal paint, painting equipment, vinyl flooring, screws, drills, PCP piping and so forth from Home Depot & Lowe’s and they would pay him for doing so.  One of the employers was under full knowledge of where the tooling derived from and was exponentially happy to receive what he needed at such a generous discount.

REDACTED?  What does a (redacted) notice on Scumbagged.com mean?  This means that we reserve the right to temporarily remove information pertaining to ongoing or pending submissions & or investigations related to other individual(s) or companies until such a time as when the article has been released for general viewing. 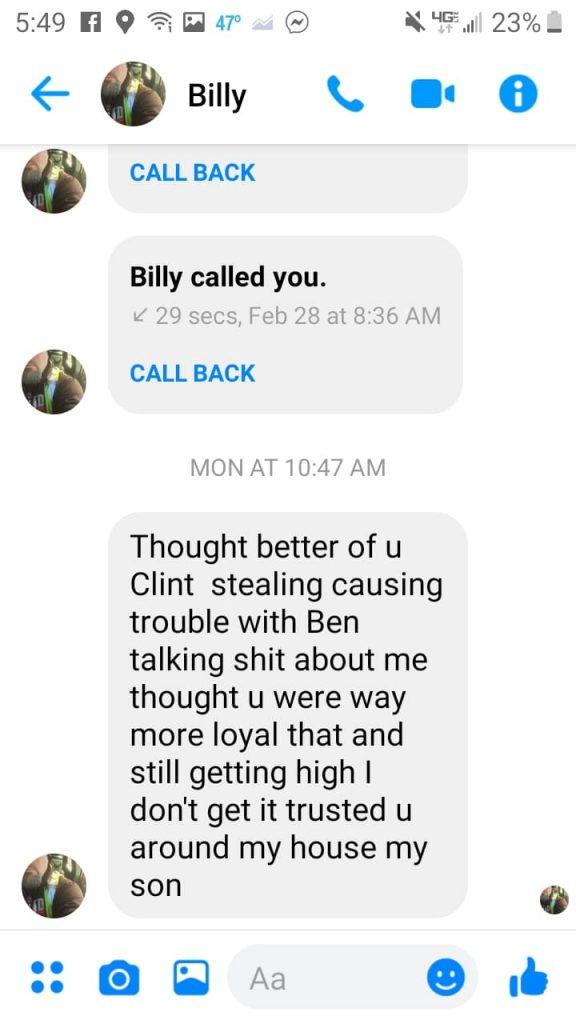 Richmond owes his mom & aunt more than $5,000 for them bonding him out of jail.  He’s also borrowed money from them for drugs and cigarettes.  In one such instance, Clint took his aunt’s new kitchen cabinets, flooring and other material and returned it all.  He received a $580+ store credit and took the gift card and exchanged it for cash.  He then lied and blamed someone else, Joshua Stout, for breaking into the garage and stealing the items (as well as his power tools, tools which he sold for drug money).  Richmond then went as far as to filing a false police report at the North Ridgeville police department just so his family would believe that it wasn’t him that stole the items.

Clint Richmond has gone as far as to steal his own mothers credit card and pulled off her last $100.  He’s over drafted her bank account, forced her to pay late fees and even stole checks from his aunt and forged her own signature.  He then blamed his then girlfriend for those most recent instances and almost got her prosecuted.  That was until the girl threatened to have the camera footage reviewed at the banks…

SOCIAL DISTANCING ALERT:  It is our belief that a simple stop at your local store, gas station, pharmacy, etc., can pose a great health risk just from this one individual or individuals that behave in the same manner.  Please review the following documentation to arrive at your own conclusion.

Rick Ferguson runs a fairly prominent and well known cellphone and computer repair company out of his home located at 35340 Center Ridge Rd. called RFCellcom.  Ferguson has for more than a decade engaged in high risk behaviors involving methamphetamine & crack cocaine use, behavior that continues to this very day.  It has been speculated that throughout the course of his business he has illegally snooped through customer devices and saved personal photos and images to his personal computers.

SOCIAL DISTANCING ALERT:  RFCellcom has been labeled as an “essential service” and is still open and operating through the coronavirus pandemic.  This individual, through his multiple contacts and high risk lifestyle places you or any would be customer at peril due to the extreme social interaction pool that is primarily dominant with drug use. 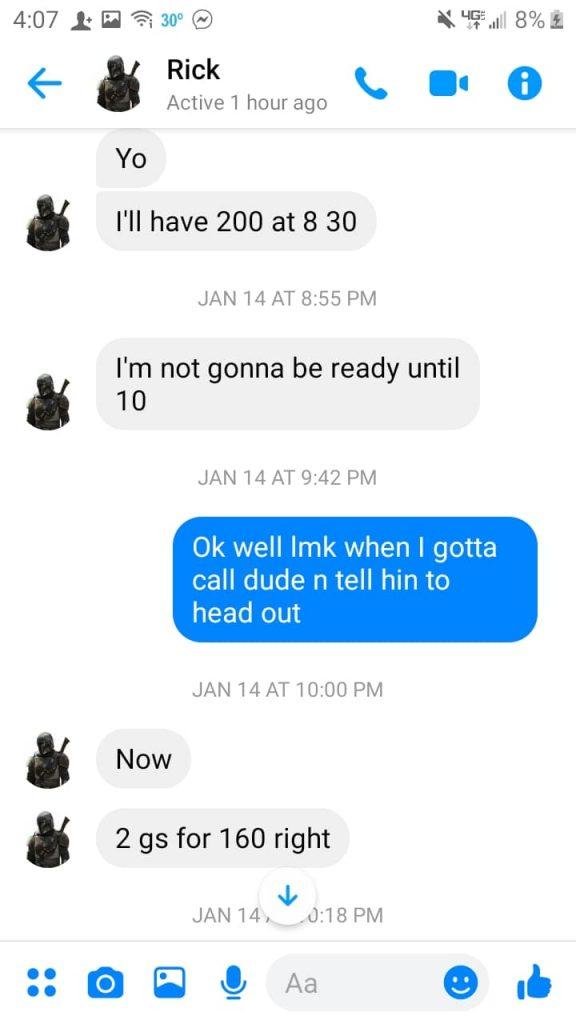 Richmond conversing with numerous individuals related to drug distribution, sales & so on can be found outlined below.

SOCIAL DISTANCING ALERT:  Individuals traveling from out of county and as far away as Toledo or Columbus while making numerous stops prior to and whilst en-route. 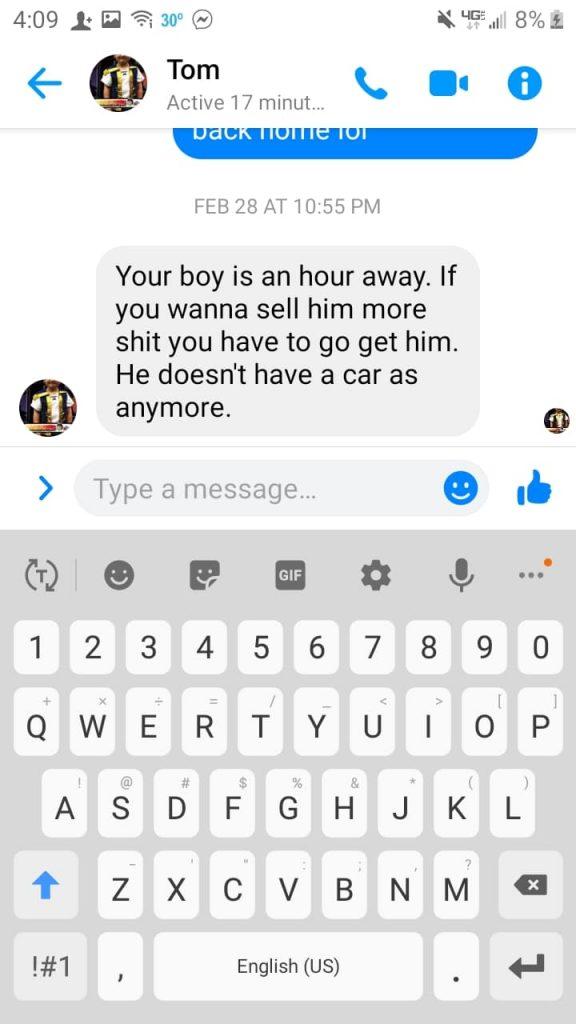 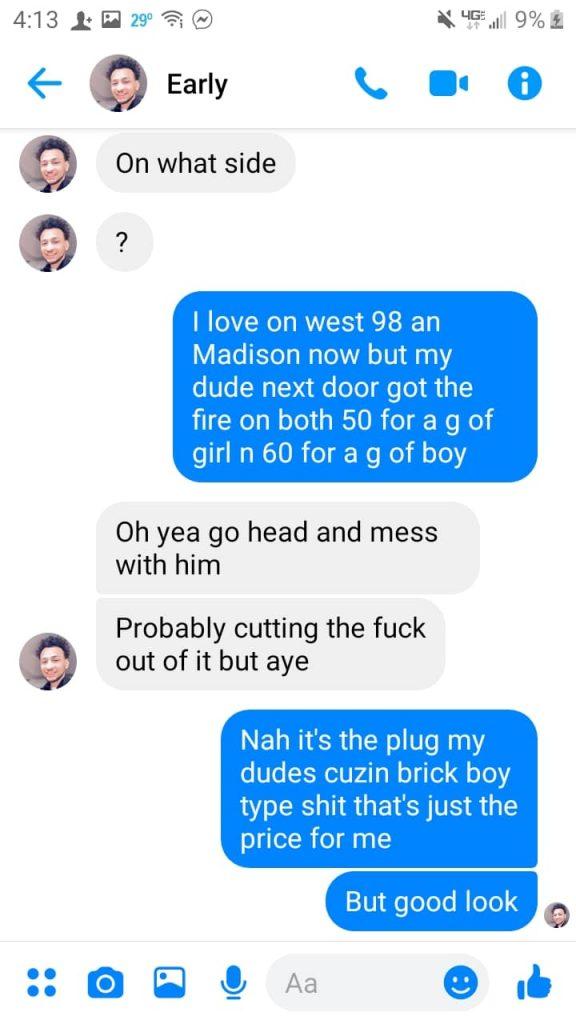 This former North Ridgeville native who back in 2005-2006 graced the covers of the local news networks and was dubbed as one of the “Christmas Burglars” (for terrorizing Northeast Ohioan’s in a widespread home burglary scheme) has a close connection to Richmond.  Richmond provides Koenig with money or drugs in exchange for returning stolen merchandise (ie; a runner) and allocating & furnishing crack-cocaine in multiple facets.

SOCIAL DISTANCING ALERT:  Traveling great distances across Northeast Ohio, meeting with dozens (if not hundreds) of people daily as well as frequenting numerous stores in the process. 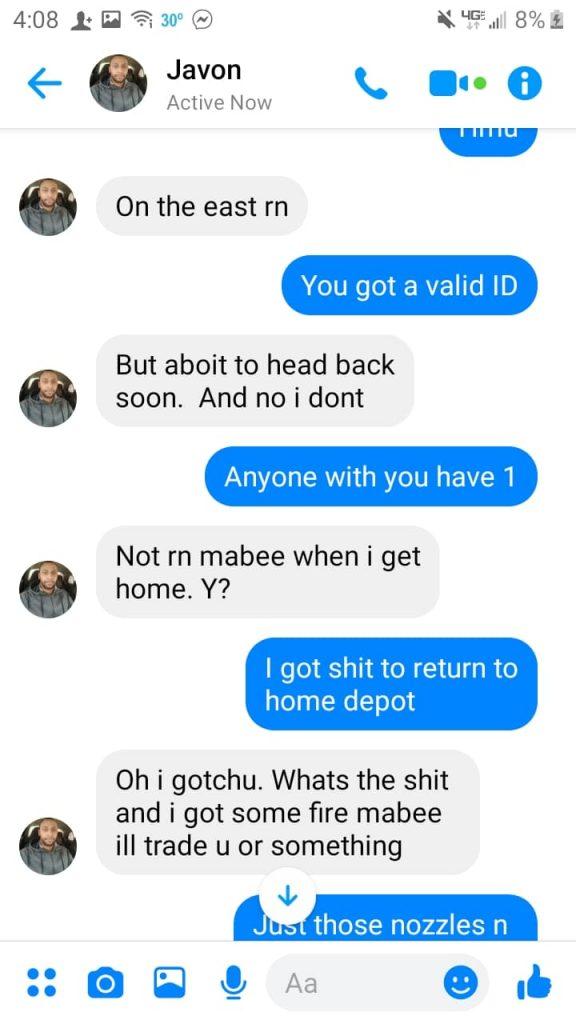 This married mother’s chat communications with Richmond show the lengths of which individuals are willing to go in order to obtain drugs within the city of North Ridgeville. 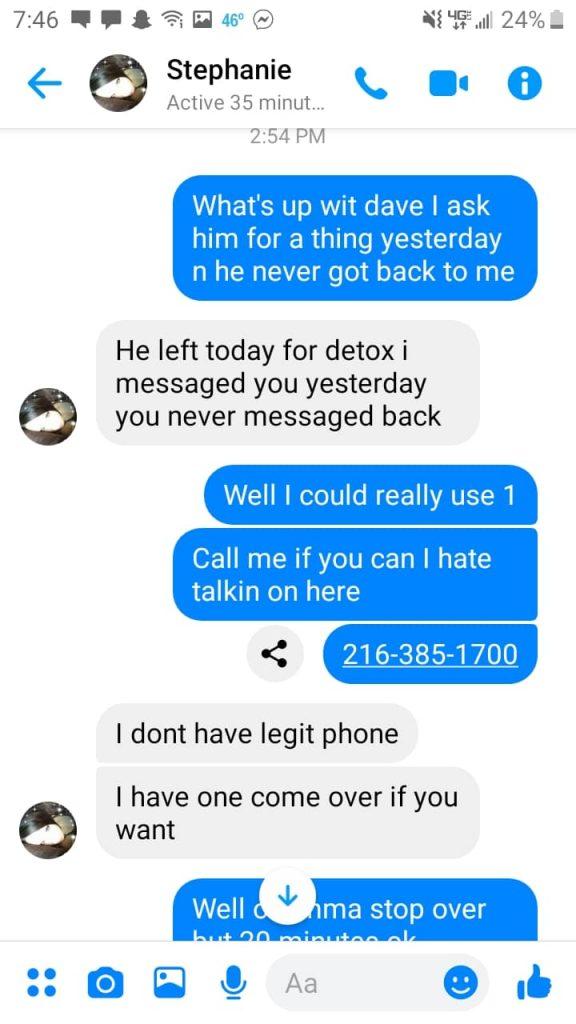 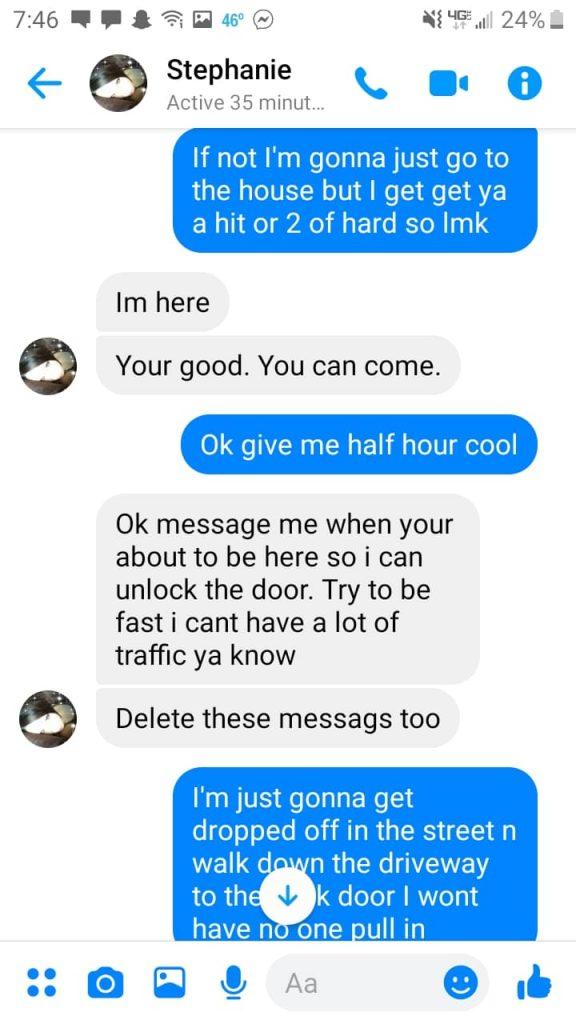 The conversation below documents organized theft that has been taking place at local Home Depot’s, this information for many authorities and the store chain itself isn’t new as there is an active investigation taking place into these events.  In general, corporations will wait until a certain dollar amount is reached before they descend upon individuals.  This ensures that a heightened charge (in this case ‘Grand Larceny’) is in place and has suspects taken off the streets for up to a decade.

SOCIAL DISTANCING ALERT:  In our opinion, an extreme hot spot for potential infection as a result of the ease of theft due to policy’s not to stop the act on sight.  It is widely known that Home Depot is hands-off in their approach to combat theft, therefore resulting in an influx of would-be thieves, ie; the wrong traffic. 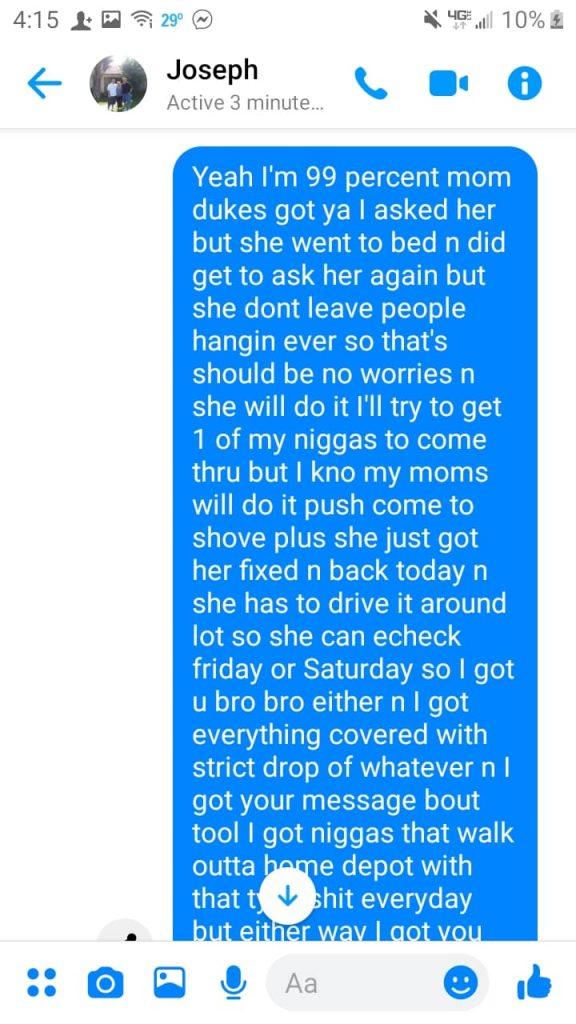 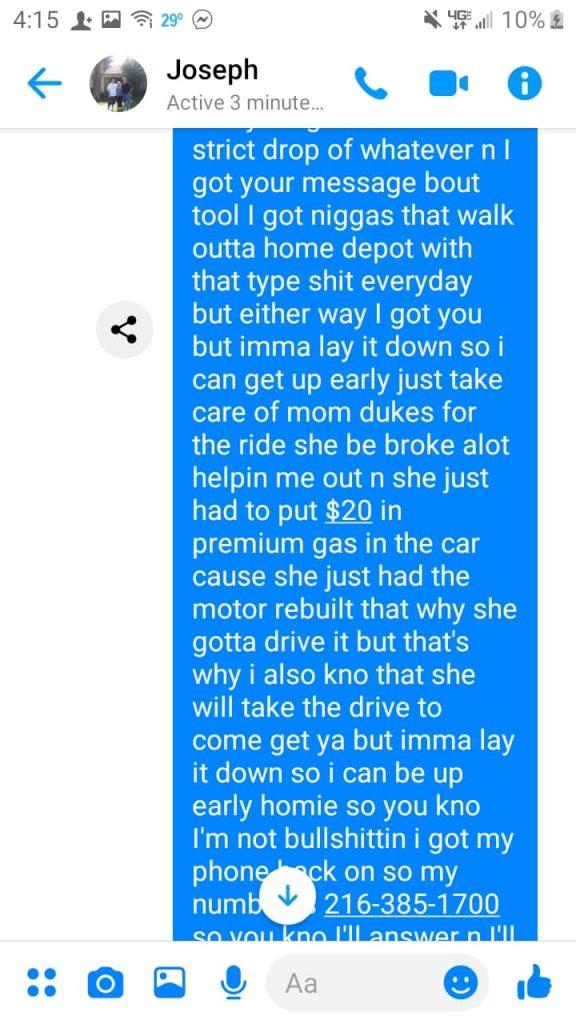 Cassie Wilson has overcame many obstacles and hurdles in her life and has managed to get sober for a prolonged period of time.  This conversation is out of context and only shows the unfortunate attempt to bring someone down.  Richmond was previously asking Wilson if she was interested in purchasing electronics (for her father) and then the conversation took a rapid and drastic turn, one that showed Cassandra ignoring entirely.  Truly a close call… Karlee Clark has been previously featured on Scumbagged: “Mommy I have Your Needle – Karlee Clark – Out of Control Mother Places Two Daughters at Severe Risk”.  After the article ran her children were removed from her custody & placed with their father and are currently in a better place, we wish & hope that the same could be said for Karlee.

SOCIAL DISTANCING ALERT:  Individual is known to travel at great lengths throughout the day as well as many paying visits to her.  Therefore greatly increasing the risk of potential exposure. These screenshots demonstrate the manipulation and desperation that goes hand and hand with drug use.   If you or someone you know is in need of drug rehabilitation please refer to the information located at the very bottom of this article. SCUMBAGGED Tip:  Don’t do drugs.  They rob you and your family of much needed finances, they deprave your local community, harm yourself and others in the process.  No matter how far gone you may be, it’s never too late to change.  If you or someone you know is in need of drug addiction assistance, please utilize the information contained below.