A 55 year old pediatrician by the name of Dr. Theresa Boyd has been practicing medicine for more than 20 years in the state of Ohio.  Her current office is located out of the Hillcrest Hospital in Beachwood and she occasionally works at the St. Vincent Charity Medical Center in Cleveland.  She is one of 69 pediatrics at the Hillcrest location and only one of 2 at the St. Vincent location.  She poses an immediate threat to all of her patients.

Dr. Boyd is a lifelong crack cocaine smoker.  She smoked crack regularly during her college years and still, even while practicing as a doctor, occasionally dabbles with the hardcore narcotic.  She sometimes will smoke weed as well, although one hit now and again, but the weed isn’t much of a problem…

Fun Fact:  Dr. Boyd also surrounds herself with individuals whom partake in the same type of drug activity.  She’s also been known to attend swinger parties and engage in high risk sexual behavior, which would place her health (strangely enough for a doctor) at risk! In addition to her crack cocaine and random drug use she has also illegally prescribed the prescription drug “Adderall” (also referred to as “baby coke”) for some of her closest friends.  She’s also prescribed antibiotics for other friends (all of whom never had a prescription).  The antibiotics aren’t so bad, but the other stuff, not so good.

COBRA Says: These are her personal friends that she has allegedly done this for and it should be noted that they are not patients of hers.  I’m thankful that my child isn’t under the care of this woman.  Don’t really mind who she writes scripts for or how much bud she smokes, but the whole smoking crack thing while taking care of children patients, that’s just a bit too much.

Her husband is a diagnosed schizophrenic who thinks that the government is after him.  She was caught telling a friend “We don’t live together, I literally sleep on the bed, the couch or the floor.  I had a bedroom before Michelle made it into an office, so now I just sleep on her couch, or the foot of her bed.” 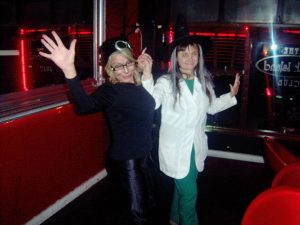 The doctor is a very socially awkward and strange woman.  Some of her behavior shines an extremely bright light into her bizarre personality.  The doctor (who is fairly wealthy) rents an art studio by the name of “Doubting Thomas Gallery” which is located in the Tremont area.  The gallery is perhaps the most normal part of her life, after-all it’s art and perhaps her artistic side is what makes her strangely unique to others.  However, her personal life cannot be over shadowed by any normal hobbies or functional work performance that she may have.  Doctor Boyd is in love (deeply) with one of her friends, a woman whose real name is Michelle Cornell.  Keeping in mind that the doctor is married, yet all of her friends are gay and she herself has multiple girlfriends.  Alrighty then….

COBRA Says:  Ones personal life really doesn’t matter, but when adding it all up, it’s apparent, there’s something wrong with this individual.

The doctor will stay with her friend Michelle for long periods of time.  Sleeping at the foot of her bed, allowing Michelle to place a collar around her neck (see photo’s of the actual collar around her neck).  Michelle, the doctors friend, is also a known coke-head who works as an accountant for a dentist. Her house is located in Ohio City off of 131st.

SCUMBAGGED Tip:  Simply put, don’t let your child have her as a care provider.  Regardless of the 20+ years of experience – it’s a risk.  This woman is not fit to be a doctor.  Someone please start administering some random drug tests and psychological exams in the Beachwood area pronto!